You'll all no doubt already have heard about this but there's this coming from Wizards of the Coast:

'Designed for 1–5 players, this boxed game contains everything needed to start playing the Dungeons & Dragons Fantasy Roleplaying Game, including rules for creating heroes, advice for playing the Dungeon Master, a solo play adventure, and group-play adventure content. Learning the game has never been so easy!
Several different character races (dwarf, elf, halfling, and human) and classes (cleric, fighter, rogue, and wizard) are presented, along with powers for each race and class.
Game components:
- 32-page book for players, with rules for character creation and a solo adventure
- 64-page book for Dungeon Masters, with the rules of the game, advice on how to run the game, and adventure content
- 2 sheets of die-cut tokens for characters and monsters
- Cardstock character sheets and power cards
- Double-sided dungeon map
- 6 polyhedral dice' 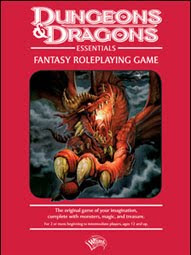 I actually quite like the looks of this. Yes, it looks old school with it's early 1980's red-box colour and layout and it's obviously trying to catch the eye of oldskoolers, and it's just a way to introduce new players to get them hooked on the bigger game at large, but that's not why I'm attracted to it. You see, as a system I quite like D&D 4e but would love to see it trimmed down to a more manageable system - I'm not a huge fan of stupidly crunchy with power-card trimmings. If this box set gets me a game I can play yet keep in the loop as far as D&D 4e is concerned (a lot of people I know play it) then I don't have a problem with it. In fact, if it's anything like my old red-box D&D Basic set (God rest it's soul) then I'll not need anything else but this for a while and I can run my kind of games for my D&D 4e friends.

Job done. I guess we'll find out how useful it is in September.