Last night I ran the first part of my Dragon Warriors campaign, set in England during the Third Crusade. Prince John is conspiring against his brother Richard whilst he crusades in the Holy Land, the people are oppressed and abused under the yoke of the gentry and the Church, bled white by taxes to pay for foreign wars, and treaties and pacts with neighbouring countries are stretching to breaking point.

Oh, and a Knight and two Assassins are being hunted down by a massive eff-off monster in an abandoned castle just north of Nottingham. Normal day, then.

The players are Jason, playing an assassin son of charcoal-burners named Gabriel Black Burn, on the run from an Icelandic trader called Eric and Lords from the south coast who were about to embark on the Crusade until they found that the supplies they had been promised were useless. They blame Gabriel for this, as he was the one who delivered them, and so hunt him down. Eric, the man truly to blame, wants him silenced.

Andy is playing the Knight, Sir Vincent of Guildford, a robber Knight devoid of home or lands, travelling the country trying to find a purpose. Unfortunately he fell in with Gabriel and decided to help him, for a few florins, with guarding the supplies. When the deal went sour he, too, was blamed and ran north with Gabriel.

Finally there is Mark playing John the Smithy, an assassin who covers his face and true identity - Bilal Ali, Saracen assassin and hunter. He landed on the shores of England searching for the murderer of his brother, killed by a man during the peace in Jerusalem under the rule of the leper king Baldwin, with a scar that runs from across his face from hairline to chin and with one eye almost permanently closed by the horrific wound. 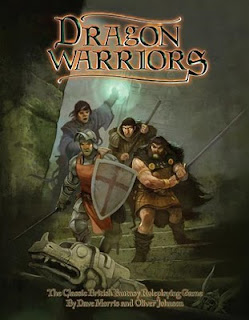 So, Gabriel and Vincent agree to help John find his brother's murderer and this leads them to an abandoned castle, the bodies still fresh from a huge slaughter. And there are hundreds upon hundreds of crows here, controlled by a great bellowing shadowy beast that causes all it touches to freeze and living things to wither and die. After fighting their way past ressurected castle guards they are now trapped in the castle's chapel, with crows beating against the stained glass windows and the undead hammering at the door. Tune in next week...

It was a great game. I really, really enjoyed running it - the atmosphere was relaxed, the game cantered along at a great pace and everyone got into their characters. The Dragon Warriors system... well, this was the first time I used it under these conditions and it performed excellently. It was fast and furious, with dice rolls quick and easy (although I had to correct people rolling 1D20 instead of 2D10 at times) and the players, all of which had never played Dragon Warriors before, fell into it easily. We even created characters from scratch and even with three players it only took 15-20 minutes to roll for the stats and then another ten minutes to decide on their backstory. That's just great.

I was worried how I'd get along with a system with no skill lists or that kind of thing but it turned out to actually be a relief to not have to worry about what skills the characters had. I just chose a target, modified it by the relevant stat and rolled against it. I tried to avoid spot ruling but even that was a doddle.

All in all a good night and I'm looking forward to next Sunday's game.
Posted by Farsight Blogger