LARPing with my son

A lovely sunny day, foam swords and my hyperactive three year old son. What more could I ask for? 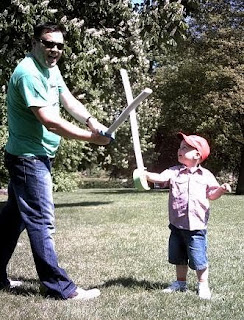 The initial duel was a bloodbath. He bested me with a single strike! 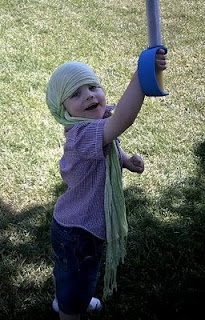 Arr-harr! Fair does, the head scarf made him look like a failed actress from the 1920's, but he did look the part when he was trying to board the pedloes in the pond. 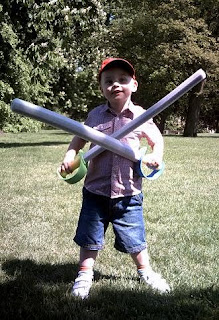 His favourite Drizzt Do'Urden pose - Dark Elf: The School Years
I'll introduce my son Bruce to all aspects of roleplaying - tabletop, liove action, wargaming - and if he gets into it then that's just fine. If not... well, I'll just make sure he grows up with an inquisitive, creative mind so that he can excercise his imagination in any way he sees fit.
I never truly got into LARPing, but a friend of mine playing my Dragon Warriors campaign does it quite regularly and he's invited me to a get together. I can get hold of some gear, that's no problem, but I'm in two minds. You see, I enjoyed the few LARPing sessions I did but it never really grabbed me. I can play in character and all that stuff but I never truly felt I was part of any kind of fantastic world. With tabletop it's all about the imagination and, in my humble opinion, the ability to see the setting in the mind's eye outweighs any physical experience.
I guess I was pulled out of the fantasy world mid-duel when a car a couple of hundred yards away thundered down the road blasting out crappy house dance music. I can't imagine King Arthur ever had to deal with Ford sound systems.
I'll give it a shot.
Posted by Farsight Blogger