With Warhammer Online 'in server transition' (and bugging me no end because there still been no answer from anyone regarding the problems I talked about in my last post) I decided to have a search around the internet to see if there are any other MMOs worth checking out.


First of all me and the wife had a look at 'Guild wars' and downloaded the free trial. 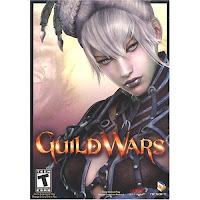 Considering that you pay for the game and that's it - there's no monthly fee - it's a pretty good deal. It's pretty to look at, easy to play and quite well made. The thing is... there's just no atmosphere. Nothing to draw you in to the game. It's all a bit of a fireworks display, with pretty colours and noises, but ultimately it's a bit hollow. The price is excellent, I just don't see the longevity in it. Also, there's this Manga-esque feel to it, and I'm sick to the back teeth of a parrot with Manga-influenced designs.


From there I moved on to the 'Star Wars Galaxies' free trial.

The graphics suck. The control and combat interface is pretty rubbish. The handling of starships and speeders blows and the character models are a little dicey. Still... it is Star Wars, and I've been playing this for the last three hours. Although it's a bit ropey it's atmospheric and fun. I'm limited as to what I can do with my trial account but if I'm still having fun with it after the fourteen days, and if Warhammer Online doesn't sort their shit out, I might consider playing it on a regular basis.
Posted by Farsight Blogger