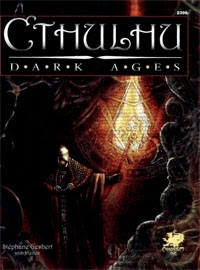 I'm a huge fan of Runequest, but it's one of those games that I've never had a chance to get involved in, or been able to get a huge campaign out of. It's not for the want of trying, but at the time I was deep into Warhammer Fantasy Roleplay and Star Wars D6. What attracted me to Runequest the most (and this was the Third Edition I was reading) was the ancient world/Dark Ages feeling it seemed to emanate. It was a fun game and I regret not trying harder to get a game off the ground.

In recent years I've leaned more towards the simpler systems, and I've delved back in to the old Star Wars D6 game and run a couple of Dragon Warriors campaigns. The last few weeks, I've been running a Call of Cthulhu campaign and the simplicity of the system has been instrumental in me and my players creating an involving, dramatic game. I've been looking for this kind of gaming for fantasy for a while.

I've been going over my games recently and I'd love to have a stab at a Middle-Earth game, or at least a fantasy setting that emulates it (like a lot of settings do). I have MERP, but I found that this game is only really suitable for one or two players as things can ge a bit drawn out with the system, especially in combat. So, my attention has turned on how to adapt a system I have to work, and after the success of my Cthulhu games, and the player's enjoying the system, I've decided to use Cthulhu Dark Ages for two reasons;

1 - We all know the system and there will be no problems moving over to a new setting, and

2 - It's basically a cut-down version of Basic Roleplaying, the Runequest system I liked so much.

There's no reason why I can't use this for the game I want to play, and getting hold of a list of Runequest magic spells and picking and choosing what I want in the game - taking into account the low-key magic of Middle-Earth - will take care of any magic users that want to join the group.

My friend Jason has already looked at running a Runequest game and is right now looking at Cthulhu Dark Ages as the system to use. I think I'll let him have a go first and see how he gets on.
Posted by Farsight Blogger