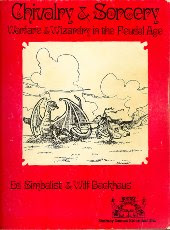 Please welcome to Farsight Blogger Steve Turner, the man at Brittannia Game Designs and the gentleman who procured the licence for the classic fantasy roleplaying game 'Chivalry & Sorcery'.


'Chivalry & Sorcery is a fantasy role-playing game that was first published in 1977 by Fantasy Games Unlimited. Originally created by Edward E. Simbalist and Wilf K. Backhaus in 1977, Chivalry & Sorcery (C&S) was an early competitor to Dungeons & Dragons. Historically, the two designers of the game were dissatisfied with the lack of realism in Dungeons & Dragons (D&D) and created the first gaming system derived from it, which they named Chevalier. They intended to present it to Gary Gygax at Gen Con in 1977 but changed their minds once at the Con, where they met Scott Bizar who wrote out a letter of intent. After some final changes to get rid of the last remnants of D&D (e.g. the game contained a table of "Saving-throws" similar to D&D), Simbalist and Backhaus published the first edition of their game - now renamed Chivalry & Sorcery - shortly after the release of the first edition of Advanced D&D.

According to Michael Tresca, Chivalry & Sorcery "embraced a realistic approach to medieval France in the 12th century, complete with feudalism and the Catholic Church. Chivalry & Sorcery was most noteworthy for creating the term "game master." It was one of the first games to place the setting at utmost importance over the mechanics of the game." More focused on medieval chivalry than fantasy, Chivalry & Sorcery (C&S) had from its first version a sophisticated and complex set of rules. The game has been published four times to improve its presentation and to modernize its game mechanics. C&S was the first to introduce new concepts like levels for monsters.

The game was reissued by Highlander Designs but when they went bankrupt it was bought by Brittannia Game Designs Ltd. (BGD), a company based in England and directed by Steve Turner. The fourth edition of C&S, called "The Rebirth" was born a few months later. The result was the return of some medieval references and some gameplay mechanics (such as "bash" or "Targeting" for spells) adding this degree of realism that was lacking in the previous edition. Moreover, many additions to the rules (such as "Laws of Magick") brought novelty to the game.


Perhaps you'd like to tell us a little bit about yourself?

I am rapidly approaching 50 and have been gaming for 40 years or thereabouts.  As well as running Brittannia Game Designs Ltd (more on a part time basis) I also run Turbo Business Services Ltd, an Accountancy Services Provider for small business.  My background is 30 years in Credit Management and debt recovery.  I am also learning to murder songs with my guitars (my mid life crisis).

Tell us about your RPG history - what got you into the wonderful world of tabletop roleplaying?

I started our gaming as a wargamer using Airfix miniatures moving from WW2 to Ancients via Napoleonic. Then in 1979 I was introduced to the GW print of AD&D and thus began my forays into RPG (although my wargaming heart still beat strong).  The whole excitement of first person adventuring into the unknown was a big attraction.  Over the years the group of friends I gamed with spread their wings into other systems, Chivalry & Sorcery, Traveller and many others.  In 1982 out of one game came the first scribbles that became the Dragon Reaches of Marakush (DRM).  I then became involved in UK Gencon writing scenarios and GMing tournaments.  This led to me becoming an RPGA Regional Director, one of the remits being to run a local convention.  Thus was the "Dudley Bug Ball" conceived which ran for a number of years culminating in a three day residential con at the Hilton Metropole NEC in 2002.

It was during this time that C&S was brought back with third edition and I approached the then owning company with a view for a licence for supplements.  We produced and released DRM and then found out the owners of C&S were in difficulties.  We managed to secure the IP and bought the game to the UK.  Following the last DBB my wife and I were suffering burn out so we stepped back into the shadows. Following a hiatus and a need for a break from RPG gaming I went back to miniatures with GW.   Then in the last couple of years with the changes in POD and the likes of Drivethrurpg we decideded to start dusting of old manuscripts and start producing again.

What is it about the tabletop RPG hobby that attracts you? What do you enjoy most when playing a game?

What attracts me to Tabletop RPG is the sheer variety of what you can do in so many settings, and the social aspects, the chance to meet up with friends and chat over drinks and food.

What's your favourite game? What games that are out there at the moment float your boat?

My favourite games over the last 30 years have been C&S, Call of Cthulhu, Harnmaster, Traveller, Savage Worlds, Leagues of Adventure and Star Wars.

Do you still get time to play? What are you playing at the moment?

I manage to game twice a week, currently playing Star Wars Edge of Empire, various Savage Worlds and look to run Leagues of Adventure.  I also currently play Flames of War, WH40K and looking forward to some Kickstarters that are due the end of this year.

I dont see the RPG hobby dying anytime soon.  This can be seen by the uptake on kickstarters.  However, from a publishers viewpoint there have been many changes.  The notion of printing, selling to wholesalers etc I dont think is sustainable in the long term for small publishers.  POD through outlets like Drivethrurpg or as co-operatives like Chronicle City is going to be the way forward.  Small Publishers are now being forced to deal direct with the end customer or Bricks and Mortar Stores as distributors do not make it financially viable to deal through them.   This is going to make word of mouth via the internet and social media more important than traditional advertising.

Out of all your projects, what are you most proud of?

Out of all of our projects I am most proud of the Dwarves and Elves racial supplements, the cover art worked so well and Wiggy's writing is superb (as can be seen with how well his own company Triple Ace Games has fared).  I am also proud of C&S Rebirth (C&S 4), although I do feel it didn't quite hit where I would have liked it to have reached.  We hope to rectify this with 5th Edition.

Tell us more about Chivalry & Sorcery, it's history and where you are with it at the moment. What was the attraction in acquiring and developing the game?

Well, C&S has a long history. Suffice to sat we now have our hands on the game which is a registered trademark.  The future looks strong with our ongoing print partnership with Chronicle City.  The main attraction for acquiring C&S was the history of using the 2nd edition for DRM, my original campaign, and being in the right place at the right time.  Also, the chance to mould an exisiting recognised game system with the addition of a british twist (correct spelling of English for a start).  Future plans include getting 5th edition out there, and polishing the many other manuscripts that we have waiting to be worked on.  What is against us is time, not enough of it.  We can be found on Facebook  and also at Drivethrurpg.
Posted by Farsight Blogger