The Lord of the Rings and my Roleplaying Hobby 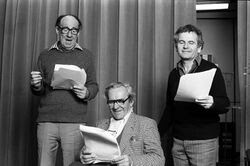 My love affair with The Lord of the Rings began when I was in the third year of school. I was eight years old and it's one of the things from childhood that I vividly remember*.

Every week were made to sit in groups around a tape recorder that had about six huge, clunky sets of headphones plugged into it, and through this we were subjected to the BBC radio dramatisation of 'The Lord of the Rings', all 26 wonderful, magical parts. It was the most exciting few weeks of my school life as I became immersed in this incredible world of magic, monsters and heroes of all sizes.

And that was it. After finding out that we had copies of both the books at home, The Hobbit and The Lord of the Rings, I set about reading them from cover to cover and savouring every page, and I also did my best to record the BBC drama on an old radio cassette player. And that was it. I declared my love for all things Tolkien and as the years passed by my  meagre collection grew and grew.

Roleplaying in Middle-earth never truly started until the late 1980s, and even then the games never really delved into the richness of the world. I'd been playing fantasy games since 1983, roleplaying since 1984, and even though I immersed myself in the fantasy worlds of the game I never had the chance, or really the urge, to game in Middle-earth. Tolkien's world never had the plethora of monsters that the D&D worlds have and I was having fun making my way through the beasties of the books, and exploring whole new fantasy worlds such as Titan, Forgotten Realms and several home-brewed locations of varying quality.

I began to play once a friend of mine got his hands on the Middle-earth Role Playing game - MERP - and I created my first ever fully-fleshed and detailed player character, Tere Swordsong. It was with this character that I was able to finally understand the creative power of roleplaying games and I allowed myself to become fully attached to the character. It was an amazing adventure and I was giddy with excitement when I walked through the doors of The Inn of the Last Bridge in the Trollshaws, and I finally began to roam the lands I loved so much.

The divergence began when the gamemaster began to create adventures that became bigger and bigger in concept, and began to affect not just my character or the location but the world as a whole. We were both wary of contradicting established Tolkien lore, probably I was more than him, and so it was then that he decided to change it form Middle-earth to a general fantasy Europe. As it turned out, it was a great choice. Now he could bring in all kinds of monsters and bad guys and have full control of the game, without any second-guessing or worrying about what was right or wrong in Middle-earth, and he didn't feel hemmed in or restricted by the setting.

The time I did spend in Middle-earth was incredibly gratifying and the fact that it also enabled me to finally get under the skin of a player character and play him to the hilt was a vital turning point in my roleplaying hobby. Every character I have created since Tere Swordsong has failed to recreate that feeling I got when playing him and, even though I played the characters as well as I was able, they never measured up.

It is strange that, considering my love for Middle-earth, I never spent much time gaming there. I could never figure out quite why that was, not until I ran my own somewhat disastrous MERP games in the mid-1990s and realised fully why it was I had shied away from it.

*I obviously don't remember it that well - it was actually 1981 and I was ten years old.
Posted by Farsight Blogger