I had a lovely time at the rather wonderful Titan Games this afternoon. I met two dudes called Mark and Rob from Prodos Games, and these guys are the driving force behind the new Warzone game 'Resurrection'. 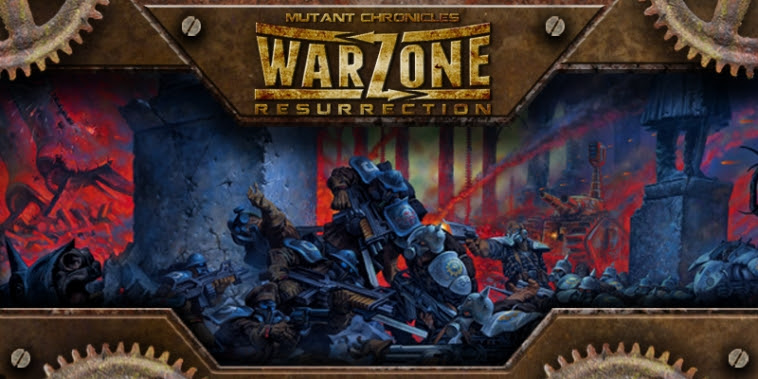 You may remember Warzone, and the whole Mutant Chronicles line, from the wargame and roleplaying game of the 1990s. I had great fun with the Mutant Chronicles roleplaying game; suited and booted big gun soldiers fighting mutated zombie undead from space? I'm a smoking hard-drinking long-haired party animal in my early twenties. Sold. The thing is, beyond the cool factor there was an excellent and well thought out background and a brilliant atmospheric setting. I played it for a good long while. You can read more about the setting at the Warzone website.

The models and demo I saw today was for the wargame and the system seemed really quick and easy. Using only 20-sided dice, rolls to-hit were made against a target number or lower (so, to hit with a certain figure might be 14, so you have to roll 14 or less to hit). A hit does a wound, and to protect against a wound you roll against an armour save, again a certain number or less on a D20 (in this case,the guy had armour of 12, so had to roll 12 or less to save against the wound or boom - death). There are cards you can play which enhances rolls or gives you another chance (the effects varied but this was a simple demo game), and other rules besides.


In the game that I watched, presided over by the dudes from Warzone, two completely new players got a decent fight on the go with about seven figures each side, and after six rounds of combat - which took about half an hour - the victor was the Necromutants, and Mishima were the losers. It was quick, fun and the players had a great time. I certainly had a good time watching. The models are well detailed and of very high quality, and they looked great painted up. I just wish I had a better camera with me.

Look out for more reports on this game in the future - I think I'll be keeping my eye on this one. The world of Mutant Chronicles definitely deserves another stab at the hobby.
Posted by Farsight Blogger