It's been a stellar few years for Free League Publishing - Fria Ligan in Swedish - and I caught up with CEO Tomas Härenstam to find out more.

Hello Tomas, and welcome to Farsight Blogger! I always ask this of all my interviewees; what got you involved in the wonderful world of tabletop roleplaying games?

I got my first RPG - the Swedish "Mutant" - as a birthday gift from my dad in 1985 when I turned 11. I think neither he nor I had any idea what it was. I sometimes wonder what he would think today about the fact that RPGs are now a major part of my life, 33 years later!

With all the games on the market, what do you yourself enjoy playing the most? There’s a lot going on with Free League Publishing at the moment, so do you even get time to play?

It's hard to find the time, but I really feel it's important to play RPGs, and not only playtesting our own games. I have played a lot of indie games in the last few years, but right now I'm starting up a campaign in 1st Edition Twilight: 2000.

Free League Publishing has made a huge impact on the roleplaying game scene this last few years; did you see this popularity coming when you started in the business, or did it come as something of a surprise?

Well yes, it has been a very welcome surprise! Of course we knew that we were making high-quality games, but we had no idea beforehand what kind of impact we would make on the international market. It's been amazing!

You’ve got some excellent award-winning games out, and they’re all different genres and styles. Tales of the Loop stormed the 2017 ENnies, Mutant: Year Zero enjoyed its own list of achievements and Coriolis – The Third Horizon has received some excellent reviews. Do you intend to release further support material for these games, such as campaigns and adventures? What do you have in the works for your existing products?

Absolutely! All of our games are, and will continue to be, supported by a line of expansions and modules. Some examples:

Mutant: Year Zero: The robot expansion Mechatron is next up, it will been sent to print in a few weeks and released in the spring.

Coriolis: The epic Emissary Lost campaign moduel will be released in the summer.

Tales from the Loop RPG: First in line is an expansion based on Simon Stålenhag’s Things from the
Flood artbook. It expands the game into the 1990s and lets you play a little older characters in the upper teens rather than the lower teens.

The movie-like trailers you produced for Mutant: Year Zero are outstanding. How did these come about and what was involved in getting them made? Will we see any more for the other products?

The particular trailer you mention was a cooperation between us and a team of animators we know. We generally can't afford to make trailers like that, but have had some great trailers later as well I think, among the Kickstarter video for Forbidden Lands and The Electric State artbook.

Your newest game is Forbidden Lands, and it’s already had an incredibly successful run on Kickstarter. What is the game about?

Forbidden Lands is a new take on classic fantasy roleplaying. It is an open-world survival tabletop RPG where the player characters are not heroes sent on missions dictated by others - instead, they are raiders and rogues bent on making their own mark on a cursed world. They will discover lost tombs, fight terrible monsters, wander the wild lands and, if they live long enough, build their own stronghold to defend. 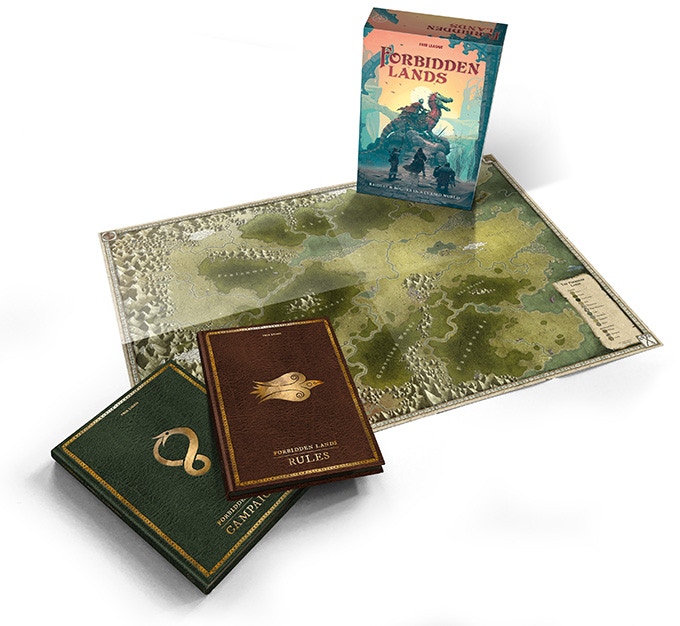 There’s a lot of fantasy RPGs out there, so what do you think Forbidden Lands will bring to the table? What makes it different?

I think it's the perfect blend between old school and new school fantasy gaming. It's truly built to let the players explore the world the way they like, while still offering an epic, overarching campaign experience. This modular approach to campaign play is unique and very much a Free League trademark. And the art and graphic design is awesome!

You’re using the same rules from Mutant: Year Zero and Tales from the Loop. What changes and additions have you had to make to the mechanics make it work for Forbidden Lands?

There is an Alpha of the game recently released to all backers, including almost the complete rules.

The core rules are closer to Mutant: Year Zero than our other games, but there are significant changes:

The system for melee combat has been expanded, making swordplay a core feature of the game.

The system for exploring the map is based on Mutant: Year Zero, but it is developed further and has rules for pathfinding, making, camp, hunting, foraging, etc.

There is a system for random encounter where each encounter is a mini-scenario, not just “D6 orcs”.

There’s a system for building your own stronghold, a little similar to the Ark in Mutant: Year Zero but different in several aspects.

What kind of support can the game expect after publication? What kind of books do you plan to release to help the game along?

There will be a big campaign book, called Raven's Purge, released alongside the main game, and after that, we are planning a range of expansions, each expanding the game map in a particular direction with a complete new map to place alongside the original. To the north, there will be an arctic landscape, to the east, there is a huge archipelago, etc. Each expansion will include a complete campaign.

What else can we expect to see from Free League Publishing in the future?

Lots of cool stuff! Some things we need to keep under wraps for a while longer, but stay tuned!
Posted by Farsight Blogger