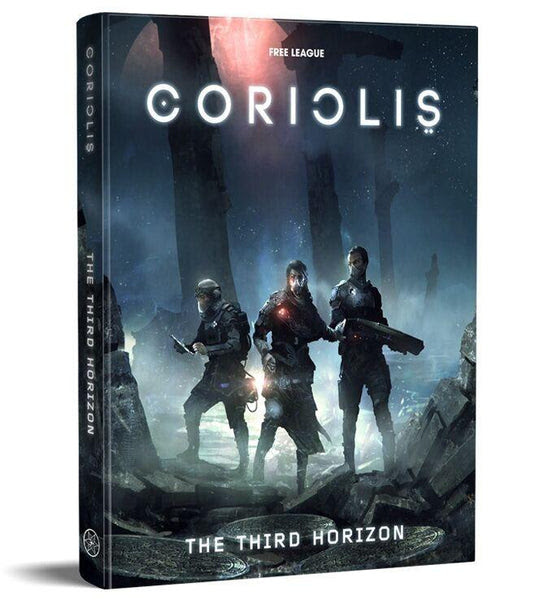 Now, this product will get a proper full-on review in the near future, but I felt I needed to share a few things about how this game from Free League Publishing has managed to not only punch me in the face and shout 'LOOK AT ME, I'M BEAUTIFUL!', it's made me think about a level of gaming that I haven't thought about for years.

I'm a huge fan of Dune, Frank Herbert's sprawling epic of feuding worlds, mysticism and cult worship that hasn't been equaled, in my opinion. What always struck me about the story, and this is something I loved about the first three books in the series, was the effect that religion and blind devotion had on some of the characters, not because they had faith in Paul's abilities but the fact that these abilities were demonstrable and therefore quantifiable, giving an entire new level of passion in the beliefs of his followers. It's why I always found the jihad in the books terrifying, not because they were devoted to Muad'Dib and believed in his powers, but because they were actually justified in their beliefs because it was all real. I'm not saying they were right in their crusade - far from it - just that they kind of had a point.

Such was the impact that this had on me as a young man it stayed with me for a very long time. In fact, with the absence of a Dune RPG I could actually get my hands on I tried to emulate it with different systems, or at least find a game that had the same kind of approach. I tried a few different systems and games (quick plug, I had some success with 'Stellar Adventures' but I did write some of that book so I'm biased!) but I couldn't find one that scratched the itch. Not only that, I couldn't find the players to play the game with me as I needed players who were on the same page.

Middle Eastern culture had quite an influence on Dune, I think, with Arabic and Islamic themes that really enhanced the universe that Herbert had created. I loved that; from the feuding houses which felt very Medieval to the sands of Arrakis that felt incredibly Middle Eastern, the themes really stood out.

I ended up letting it go, and instead of trying to game in the world of Dune I decided to try and find a game that emulated aspects of it that I loved.

And that brings me on to Coriolis.

Coriolis wears it's Middle Eastern influences proudly, and rightly so. It even has it's own system of mysticism, with it's fledgling powers and Icons, and the Dark between the Stars. There is true power here and the people of the Third Horizon, with their designs and beliefs shaped after Arabian culture, exist in a world where this power exists, they can pray to it and get results and can exhibit powers that could drive entire nations into a religious fervour.

That's perfect. That's what I'm looking for. It's not the Dune RPG I hankered for, but then I'm not sure a true Dune RPG would ever really work as different people come away from the books with different impressions; some love the feudal warring Houses and the intrigue, some love the environmental references, some like the religious overtones, some love the action and adventure elements. That would make a Dune game difficult. However, Coriolis takes each of those different angles and mixes them all together... well, maybe not so much the environmental side of things. Action/adventure, mystery/exploration, mysticism/intrigue, and to cap it all off there's a metaplot that opens up all kinds of opportunities.

Can you tell that I'm quite excited about this game? Finally I might be able to play in a world that I've thought about since my first attempts at a Dune game, and I'll be able to cater for the different kinds of gamer that wants to sit at my table. I get to explore the effects of faith and belief and my players get to fly around in spaceships and blow stuff up. I think we'll meet somewhere in the middle, and Coriolis - The Third Horizon will facilitate that.

Coriolis – The Third Horizon is a science fiction role playing game set in a remote cluster of star systems called The Third Horizon. It is a place ravaged by conflicts and war, but also home to proud civilisations, both new and old. Here, the so called First Come colonists of old worship the Icons, while the newly arrived Zenithians pursue an aggressive imperialistic agenda through trade and military power.

In this game, you will crew a space ship and travel the Horizon. You will explore the ancient ruins of the Portal Builders, undertake missions for the powerful factions and partake in the game of political intrigue on Coriolis station – the centre of power in the Third Horizon. You might even encounter strange beings from the Dark Between the Stars.

From the Monolith in the jungles of Kua to the floating temples of Mira, the Horizon is yours to explore. You can be traders, explorers, mercenaries, pilgrims or agents. Whatever your calling is, together you will make your own fate. In the end you might even discover the truth about the mysterious Emissaries and the threat of the Dark Between the Stars.

Coriolis – The Third Horizon was awarded the ENnies Judges’ Spotlight 2017 and is produced by the makers of critically acclaimed Mutant: Year Zero (six-time nominee and winner of a Silver ENnie for Best Rules 2015). Features:

- Create your unique player character – including skills, talents, gear, and relationships – in mere minutes.
- Fight fast and furious battles, praying to the Icons to overcome your enemies.
- Build and crew your ownspaceship, to explore the many star systems of the Third Horizon.
- Experience thrilling spaceship duels, using a game system that puts all player characters at the heart of the action.
- Take part in the intrigue between powerful factions on the majestic space station Coriolis.
- Uncover the mysteries of the Third Horizon, a rich tapestry of cultures that have settled the stars.