Why the cover of Dragon #126 is important to me

When Dragon magazine issue #126 hit the shelves I was 16 years old. It was around December 1987 when I got it and I was only about three years into the roleplaying hobby so I was pretty new to everything. Dragon magazine, as well as White Dwarf, were my two publications of choice when it came to reading material and they served me well.

Up until I saw this amazing Daniel Horne cover, which remains one of my very favourite pieces of fantasy art to this day, the depiction of women in fantasy circles wasn't great. In my experience they were busty fighters clad in scanty clothes (no matter what the weather was like), they were desperate princesses chained to columns, or they were sexy sorceresses with a long, curved leg sneaking out from under their tight robes. No matter the situation they were in - fighting a dragon, casting a spell, wailing for their hero to save them - their hair was immaculate and their figures full and alluring. It was everything a teenage boy getting into the hobby needed and the target demographic was catered for in almost every way.

Then I saw this image. 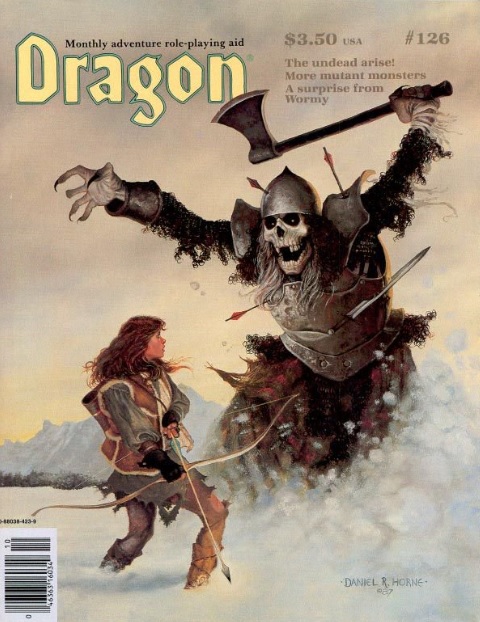 'Woah', I thought as the magazine pretty much jumped from the newsagent's shelf and into my hands, 'hold on a minute...'

The woman wasn't scantily clad. In fact, she was dressed in a fashion which seemed to suit the environment she was in, with fur-lined clothing and gloves. Her leggings were tattered, not in a sexy suggestive way but, by the looks of it, she'd been fighting this dead dude for a while and had managed a lucky escape. Her hair was wild, a little unkempt, as it should be if you were fighting an 8-foot tall undead bastard with a massive axe, and she didn't look like she was trying to suggest something lewd; she was rightfully concerned, because she was preparing her last shot against some crazy skeleton who had already taken a few arrows and a sword. And she was on her own - she wasn't standing behind a fighter while preparing a spell, or heaving her bosom forward while hefting an ineffective shield.

She was fighting, desperately against the odds, and trying not to die. She was a hero and, for the first time, she was a female character I could relate to without wondering about how suggestive it was, or without me reacting to the blood-pumping sexuality of the image first and then wondering about what it meant later.

Since this image I never took bikinimail, boob armour or slinky sexy mage robes seriously ever again. In fact, if I see any art that depicts this kind of thing I immediatelty veer away from it, because it's just not representative of the kind of games I want to play and if a game feels it needs cleavage or legs to sell itself then, perhaps, that's not a game I want to be playing.

At 16 years old, that's quite a revelation. I still had my reactions to suggestive images - I can't apologise for that, I was a hormone-charged teenager - but I also learned that I couldn't take those kind of images seriously and, by extention, couldn't take the game they were attached to seriously. That was most likely unfair and I probably missed out on a lot of great games becsuse of it, but sadly that was the way I felt.

I can't be done with suggestive artwork of any gender. Give me something tangible, real or possible or don't give me anything at all because my suspension of disbelief only goes so far. Like I said, that's most likely unfair and almost certainly a bit strange because we're talking about make-believe fantasy worlds here, but I've always been for the low-fantasy, gritty games anyway, so that's just me.

Anyway, this Daniel Horne painting was a game changer for me. Literally. I dropped the damsel in distress, saucy female fighter and beefcake barbarian games and switched to stronger, more realistic games with much less over-the-top imagery, That took a few years, to be sure, because I still had a lot of maturing to do, but I like to think I got there in the end.
Posted by Farsight Blogger