And yet, on the evening of the 18th of June 2009 I sat down with friends Mark and Paul to take part in Jason's 4th edition campaign. 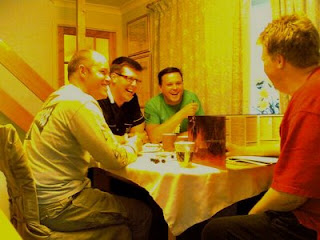 The Four Tabletopeers - that's me with the green top on

I gave up on D&D back in 1989 after a failed Dragonlance scenario and an awful Ravenloft campaign (I was a player, not the DM). The system was clunky, the action slow, the whole thing generally dismal. I had already discovered the wonders of Warhammer Fantasy Roleplay (crappy career system and all) and Star Wars D6. I didn't need pesky old D&D! Old hat, man! Old hat!

And so it went for twenty years. The 3rd edition and the save attempt that was 3.5 came and went and I barely even noticed. But then out came 4th edition and Jason bought the books and got my interest peaked. No THACO? I'm in!

Now, I've been playing World of Warcraft for about five months and I was enjoying it (though I missed the social gathering side of gaming and I was tired of the 'duel me, noob!' messages my level 35 Dwarven Hunter was constantly getting - duel you? Piss off, you're a level 80 Death Knight, bitch!) so I immediately saw the similarities once the game got under way. Every character had a role to play in the group, powers for aiding and buffing, special attacks - it was all there. It appeared that the new D&D had grown from the game that had grown from original D&D - the new incarnation had been inspired by the inspired. Even the artwork had the feel of Warcraft and my character, a Tiefling cleric, had the air of Draenei about him, but I enjoyed it. In fact, I enjoyed it so much I actually considered buying the basic books for myself so that I could look into running games of my own.

And that was after a single game. Oh, most of the enjoyment probably came from the fact that the DM was the same guy who had DM'd my very first ever RPG in 1984, and the other two guys with me I'd gamed with for more than twenty years but hadn't sat at a table together with for almost nine... that was cool. The nostalgia, the atmosphere, the sheer fun of beating down on goblins.

But most of all? What I liked about it the most?