Ah, Rogue Trader. Where else could I fly through space in a giant cathedral, commanding tens of thousands of crew and deciding the fate of entire worlds? Nowhere, that’s where. 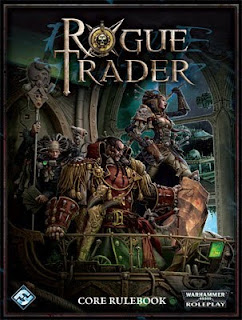 My experience with free trading in a science fiction setting has been pretty much nothing but the D6 Star Wars RPG using the Tramp Freighters Galaxy Guide. In fact, most people will think of Han Solo and Malcolm Reynolds when it comes to this type of game. That’s a bit of a nightmare, to be honest. It’s fun zipping about the cosmos as a crew of half a dozen – it’s easy to control as a GM and keeps the action flowing. Thing is, after more than ten years playing that kind of game, it gets kind of repetitive. How do you inject something new into the mix? That’s easy. Give your players a crew to deal with. Say, oooh, about TWENTY THOUSAND OF THEM!!

In this game you will literally be flying giant starships, hundreds of years old and kilometres across, built like gargantuan interstellar cathedrals. Your mission as a Rogue Trader is supposed to be to explore strange new worlds (to dominate, bring under the control of the God-Emperor and abuse for resources and profit), seek out new life (to exterminate) and new civilisations (to steal new technology from)… to boldly go where no man has gone before (primarily because if they do they’ll have their heads bitten off). Under an ancient Warrant of Trade you and your crew will be able to fly beyond the boundaries of the Imperium and explore the vastness of the galaxy, trade, deal and dominate other worlds, alien or no, and create profit for your starship. Basically, you’re told to sod off into space and pretty much do what you want – in the name of the Emperor, of course.

The very term Rogue Trader tells you this might not always be the case and this is perfect for the sort of games I want to play. Years ago I used the Warhammer Fantasy Roleplay rules to try and run a game in the 40K universe. It worked fine but the fact that the regime was so oppressive made my games a little limited (more my fault than the setting, perhaps, but when the player’s answer to everything is grimdark WAR FOR THE EMPEROR! it gets a little restrictive). I don’t want to be limited by the domination of humanity by the Emperor and that everything the billions upon billions of humans do in the galaxy is for His and the Imperium’s benefit.

So I’m glad I purchased Rogue Trader because now I can fly away from the Emperor’s sphere of influence and pretty much do what I want. Rogue Traders and their crews may be the representatives of the Golden Throne but they are left to their own devices and are a power unto themselves. So those dirty Xenos and possibly heretical human worlds that the Emperor wants vaped in the Imperium may be the very creatures you make profit from in trade and diplomatic relations outside the borders for humanity. You may end up relying on them for help or aid or supplies, and you may have to make some pretty shady deals or pacts with enemies of the human species. Brilliant.

As I’ve not fully played this game I’ll give you a brief overview of the book.

Careers include the Rogue Trader (captain), the Arch-militant (the combat specialist), Astropath Transcendent (the telepath, kind of a communications guy but it goes far beyond that and they get all kinds of psychic powers – this also applies to the Navigator), Explorator (engineer), Missionary (a priest zealot), Navigator (a dirty mutant!), Seneschal (the guy ‘in the know’, with contacts and such), and the Void-master (pilot). Each has a distinctive role to play and has plenty of gaming potential. Add to this a cool list of guns, bombs, cybernetics and other kit and you can create a pretty good character with all kinds of quirks.

Starship creation and combat is decided by a point-based starship creation system. With this your players can create a starship of their own – there are several basic designs to choose from and then they spend points to beef them up for battle, make them better for trade and commerce or somewhere in between. Combat is fully covered.

GM tips and background material is plentiful, giving you plenty of ideas for games and hints on how to evoke atmosphere. It also gives you the background necessary to understand the universe of 40K. Then there’s a small section on adversaries and NPCs, and a detailed description of the Koronus Expanse, a section of space for the players to explore as they settle into their new roles. Top this off with a short adventure and you’re ready to go.

WHAT I LIKE ABOUT IT
- Wonderfully presented. The artwork is lovely with only a couple of ‘meh’ illustrations and it evokes some good atmosphere.
- The rules are simple. With twenty years of Warhammer Fantasy Roleplay experience it was a doddle to get my head around it. I don’t see any newcomers to the system having any problems.
- It is its own book. I don’t need to by x-amount of supplements, everything I need is right here.
- The Origin Path is a cool way to help character creation. PCs with similar histories could have crossed paths before and that makes for some good roleplaying.
- I managed to get the full gist of the rules and setting in one two-hour reading session. Now, that’s probably because of my experience with WFRP but I know it was also because the layout of the book was well realised and easy to navigate. The index is a massive bonus, as well.
- It gives you plenty of advice on how to run a Rogue Trader game and really invokes the atmosphere of the setting. I feel like I’m ready to run a game right now and the sheer scope of the premise opens up all kinds of avenues of adventure.

WHAT I DON’T LIKE ABOUT IT
- Not enough stats for vessels, enemy vessels, NPCs and foes the Rogue Trader might come across. I felt it was a bit lacking in that department.
- There are a few typos and what have you, and there were a few times I had to re-read a sentence or a paragraph because the explanation wasn’t clear.
- Everyone will want to be the Rogue Trader captain. Let’s face it; you don’t want to defer to a fellow PC’s decision.
- With a crew of thousands at their beck and call your first few games are going to be a struggle, as your players will simply send NPC crewmembers to do their dirty work.

No doubt some of my problems with the game will be ironed out once I get to play it. All in all, it’s an excellent product, beautiful to look at as it is to read and will no doubt make for some brilliant games with like-minded players who can get past the idea that trading in space isn’t all about the Millennium Falcon.

Want some inspiration for the game? Here you go.


Ends suddenly, though, which is a shame.
Posted by Farsight Blogger