So I'm reading 'Retribution Falls' and it's a damn good book. Some of the imagery makes me think of Warhammer Fantasy Roleplay, for some reason, and this got me thinking about running more WFRP games but with a slight twist.

I'm imagining the Old World as it is in the normal games, especially with some of the imagery from the Warhammer Online Collectors Box book, but the main mode of transport is by airship. I got some inspiration from the Gotrek and Felix novel 'Daemonslayer' and some imagery I found on the interwebtubes 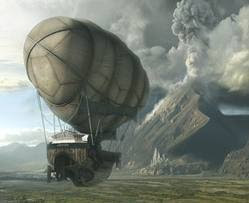 Art by David Edwards
The one above I imagine to be some normal trader, plying their trade across the Old World as a private enterprise, with a small crew to keep things running. Some could be converted boats with gasbags above them, designed for air and water, and some could be purpose built or modified with a flat hull so that they could land anywhere. They would be expensive, so it's not done to destroy them or send them down, much like the attitude of mariners in the 18th/19th centuries - better to capture them intact as a prize instead of sending them burning to the ground. 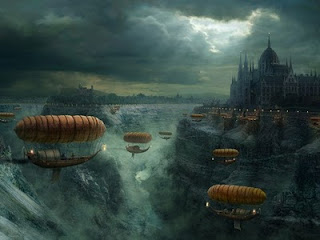 Art by Kornel Ravadits
The next one helps to illustrate a central town or city where many airships come and go like a busy airport. Places like Marienburg and Altdorf would be central areas of commerce and activity and there'd be huge towers for docking, landing fields for longer stays and giant hangars for repairs. 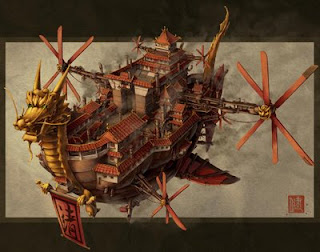 Art by James Ng
Then there'd be other countries vying for trade, travelling huge distances in massive airships designed for long-distance travel, equipped with all the luxuries that dignitaries and ambassadors expect.

Powered by gas and magic (hey - 'Gas and Magic' - that's a good campaign name) these machines are helped up by gases but held up by powerful sorcery, much like they're being flown by WH40K Navigators. Using the stats for boats in the WHFRP 1st Edition rulebook, this could work a treat. It'd be like science fiction free traders in the WFRP world, with flintlocks and cutlasses.