Cthulhu Dark Ages - I'd like to give it a good shot

I'm a massive fan of Cthulhu Dark Ages. I love the system, the design, and the fact that I have a great roleplaying game using one of my favourite game engines and periods of history. The Cthulhu part of it is both a bonus cherry on top and an option, as I'm more than happy to drop the Mythos and concentrate on the period, maybe adding my own low-fantasy twist on things.

I came into posession of this wonderful map that I found on the website www.anglo-saxons.net - it's a great little resource for this kind of thing. 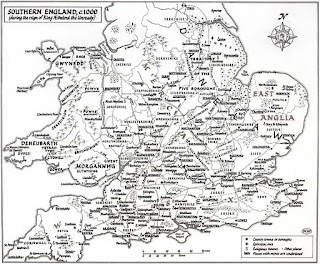 I think it's great - it's covering the general period that I want to game in (I'm looking more towards the late ten hundreds so that I can squeeze in some of the First Crusade) and has some very nice names. I'll be making up my own places, of course, but generally I'll set it around the Midlands, near where I live. There's the city of Lichfield marked on this map; that's where I live!

I could easily go beyond the 11th century as the game is so flexible, but this age is pretty good. I've been wondering about doing a Medieval period inspired game and, strangely, it's only kind of struck me recently as to why I don't just do a game set in the Medieval period. I mean, I've been playing in games that emulate the period in a fantasy setting, and recently I've been running a Dragon Warriors campaign that's perfect for that kind of era.

The things is, as much as I love running Dragon Warriors - and long may the game continue - I want to do something a bit deeper, with a bit more detail and system crunch. Dragon Warriors is perfect for the group I have now; 6 players and a very simple, fluid system makes for a fun game that doesn't get bogged down in detail and slow the progress down when you're trying to keep 6 people entertained. If I run a Cthulhu Dark Ages game I'll want 2 or 3 serious roleplayers who want to get into character and enjoy a slightly more complicated system. This way the characters can have a bit more detail and the game can be a lot more focused.

As I type this I'm listening to the 'Robin of Sherwood' soundtrack 'Legend'. As I hear the music I'm reminded why it is I love Dragon Warriors, for the fun stories and high adventure we're creating. If I run this Cthulhu Dark Ages campaign, I think I'll play the 'Game of Thrones' or 'The Pillars of the Earth' soundtracks, instead.
Posted by Farsight Blogger