The Flavour of a Fantasy Roleplaying Game

I've played all kinds of fantasy roleplaying games with all kinds of systems in a variety of settings. I've mostly enjoyed them all but I'm a hard man to please as I have a definitive idea in my head regarding how a fantasy world is suppossed to look. Being from England and having been surrounded by medieval imagery all my life I'm of the pseudo-historical slant, the kind of guy who loves to have magic elves sauntering about the place but wants them to dress realistically.

One of the reasons why I love 'Warhammer Fantasy Roleplay' (1st Edition) and the Magnus Opus Press (soon to be Serpent King Games) 'Dragon Warriors' games so much is the atmosphere they exude. Warhammer was gritty, dark, and felt like a heady mix of high fantasy and dirty, European reality, and Dragon Warriors was a fantasy version of the history I grew up with. On the other side of the coin (and just as enjoyable - don't think I'm belittling anything) is the high fantasy stylised worlds of Dungeons & Dragons and it's ilk, with bikini mail and unfeasible weapons and armour.

I'm sure it'd be easy to play a D&D game as gritty and realistic, even play Dragon Warriors as high fantasy, but the artwork and presentation of the books themselves help to tell me what kind of game I'll be playing. In some ways, you could say the artwork colours my view and even expectations of the game I'm going to play.

Take, for example, the artwork of a selection of Dungeons & Dragons 4th Edition books: 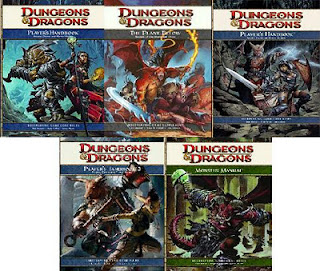 The artwork is stylised, with larger-than-life images, dynamic poses and in-your-face attitude. The setting is presented as high fantasy, indicating that realism doesn't really matter when you're playing in a game of huge heroes, high magic, insane monsters and talking trees. The covers are positively screaming for you to go apeshit and have fun with it. And indeed I have had fun with it - although I've now moved on to an excellent Pathfinder campaign, which does share some of the look and feel with the above, I still feel there's a huge 'in your FACE!' feel to the imagery and design. There's a great sense of disconnection from reality, that you are this larger-than-life hero. I think that's part of the appeal.

Now let's have a look at some covers for the Dragon Warriors game: 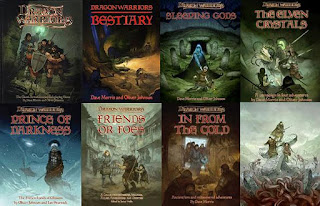 The image on the bottom right is the cover for the unprinted 'Player's Book'
I'd say that these covers were bleak, and much more grounded in reality than the D&D covers (of course, I use the word 'reality' loosely - we are talking about fantasy roleplaying games, here) which presents a totally different gaming atmosphere. I look at these and I think of a living, breathing medieval Europe with the trappings of a fantasy world, a world I can in some way relate to as I recognise the look and feel of the artwork. To be honest, that's my kind of game. I want that sense of pseudo-history.

I wonder if this is something to do with the fact that I'm British? I live in the historical Cathedral City of Lichfield and since childhood I've been bombarded with images, stories and lessons about the medieval period. I know what things are supposed to look like, how things worked, how people dressed. To a certain extent I understand the attitudes. This has no doubt influenced the kind of games I like to run and play in, but doesn't diminish my enjoyment of high-fantasy games. Given the choice, though, I'll take gritty pseudo-history games over bombastic high-fantasy games anytime.
Posted by Farsight Blogger