My Kings of War army

I've gotten into Kings of War recently. So much so that I've developed a roleplaying game system around the wargaming rules and I've put together my own 800 point Elven army.

I got the miniatures for next to nothing a few months ago - they're very old Games Workshop figures from about a decade and more ago and they've already been painted of a sorts, but the design and size is perfect for a Kings of War game and I'm just missing a couple of scout miniatures, but other than that I'm good to go. 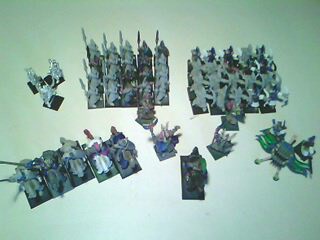 My force is comprised of:

I've even got a model that can be used for a Drakon or Dragon rider, but I figured 800 points was enough. There's plenty of dudes around here to play against, especially with Titan Games around the corner who love what Mantic Games are producing. I'm looking forward to getting stuck in.

My main problem is that I can't paint miniatures - I have neither the time, talent or the patience to paint the figures up. I'd love to be able to field an army that's wonderfully detailed and presented, but I know that's not going to happen. I'll probably just do what I did with an old army I had when I was wargaming back in 1991, and that's just spray them red and say 'these are mine'. As long as I get to play I'm really not fussed.

Now that I've got this force sorted, I'm also working on a Free Dwarf army that will come to about 700 points as I've got loads of miniatures for them, as well. Kings of War is a great game and I've not been this eager to play a wargame for at least twenty years. Once I get used to the game using my Elven and Dwarf armies I'll decide which one I like the best and start buying the Mantic miniatures, as well.
Posted by Farsight Blogger