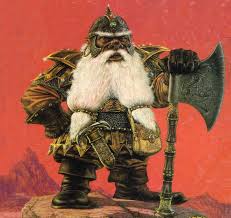 I'm playing a dwarf in the regular Thursday night D&D game and even after two sessions I'm still undecided how to play him. Gruff and miserable? Bombastic and coarse? Violent and unpredictable? My problem is that the only other dwarves I've ever played are Warhammer Fantasy Roleplay dwarves and I pretty much stuck to the archetype - he even looks a bit like the White Dwarf, Games Workshop's prominent character - and now when I try to play one it just comes over as a knockoff of Gimli from the Jackson movies.

I've designed a background for him... well, I say I designed it for him, I ported it over from an old ranger character I created for my friend Laura's 3.5 game, but the history appears to suit him. I won't go into details as other group members might be reading this. It's not a game-changing past, just really interesting.

The thing is, I honestly can't get his character nailed down. One minute he's gruff and surly, the next he's having deep, meaningful conversations or taking pity on someone. There's no consistency and I'd just like to be able to sit at the table and get into character and know where I'm going with him.

I'm a GM, for pity's sake. This playing thing is hard.
Posted by Farsight Blogger