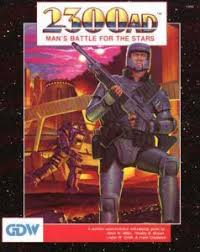 I played a little Traveller in the 1980s - sadly, the majority of the games were Star Wars inspired but lacking in any kind of adventure or excitement, but I enjoyed the game system immensely. When the West End Games Star Wars RPG supplied the pulp science fiction adventure I was looking for I then started to look for much more hard sci-fi games, the kind of games I wanted Traveller to supply me with. I found 2300AD: Man's Battle for the Stars in Virgin Megastore, at a time when Virgin Megastores had huge RPG sections, and the attendant told me 'yeah, it's kind of like an updated version of Traveller'. So I bought it, and found out later that it was nothing like the Traveller I remembered. So thank you, Virgin Megastore shop assistant, for not really knowing what you were talking about, even though you were right about the Traveller connections.

2300AD is a great game, with some very hard science fiction ideas and a great background, pretty much picking up the future 300 years from where GDW's Twilight: 2000 RPG left it. The system was pretty good, even though there was a lot of mathematics involved, but I thought this just added to the hard science fiction feel of the game.

I wish I'd got a game off the ground and done a proper campaign with gamers who would appreciate a hard sci-fi game and were also really good at maths. I still have that hard sci-fi itch to scratch even after all these years. I've just got Traveller once again so maybe that'll help.
Posted by Farsight Blogger