By Serge Pelle and Sylvain Runberg

Orbital is (currently in English) a four-volume graphic novel from the pen of Sylvain Runberg and the paintbrush of Serge Pelle. It’s a huge, galaxy spanning science fiction adventure set in the 23rd century. An intergalactic organisation that has been in power for 8,000 years reluctantly allows humans to join, as humans are seen as a young, unpredictable and possibly dangerous race by the other members of the organisation and have therefore been kept out of it. The Sandjarrs had stayed out of the organisation and their politics until conflict arose between themselves and the humans.

There are two stories divided into two volumes each. The volume descriptions below are from the Cinebook website www.cinebook.co.uk:

Volume 1: Scars - Caleb, a human, and Mezoke, a Sandjarr, are paired up and trained as special agents to keep the intergalactic peace. This is a controversial and historic alliance, and a lot of people are watching them. Their first mission is to keep war from breaking out between humans and Javlodes on the planet Senestam.

Volume 2: Ruptures - Caleb acts as a mediator between the warring factions while dealing with an attack by Stilvulls (highly destructive insects) - and he also has to contend with his feelings for charming doctor Kim Vandersel. Mezoke is on the planet Upssal, trying to appease the Javlodes

Volume 3: Nomads - Caleb and Mezoke are on Earth for celebrations marking the end of the Human-Sandjarr wars, running security for the ceremonies. When an incident occurs between Malaysian fishermen and a nomadic alien species called the Rapakhun, they are brought in to investigate and to lead negotiations. But tensions are high, and something is killing the fish in the mangrove swamp. The two agents will have to contend with the humans’ lingering mistrust towards aliens in their efforts to solve the mystery.

Volume 4: Ravages - The unexplained deaths in the mangrove have not deterred authorities: The ceremonies will go on as planned in Kuala Lumpur, despite Mezoke’s resistance and growing disagreement with Caleb. But the official optimism is soon dampened by news of further destruction, closer to the city. And when Nina and Angus return with the identity of the killer, an old enemy of the Confederation, the agents will be forced to act in desperation - and, maybe, to pay the ultimate price.

First of all, the books themselves. They are 22 x 29 cm softback books in full colour, and at 48 pages you get quite a lot of story. It’s decent and robust paper stock with glossy covers, and the text is clear and easy to follow.

Now for the artwork – this is wonderful stuff and in the first dozen pages you immediately settle into the atmosphere the story is trying to invoke. The characterisations of the humans are a little more cartoony than normal, some of the images have an almost comical appearance, but each character is defined and has their own personality on the page. The images are crisp and wonderfully coloured with tones reflecting where they are – bright and crisp for outdoors, dark and moody for the ravaged moon, plain and stark for the Orbital. Strangely, it’s the alien races that benefit from Pelle’s style of artwork, with a huge plethora of species whose images beg for a fleshed-out background and history. Mezoke, the Sandjarr, is a simple jet-black head with red eyes and pouting lips but he manages to express her feelings incredibly well. The setting itself is designed on an epic scale, with inconceivably huge space stations, starships and creatures exploding form the page. The sheer number of concepts in the first volume alone is enough to keep you wondering for a long time. Hats off to Serge Pelle, the artwork is wonderful. It’s been a while since I’ve stared at a page of a graphic novel just drinking in the wonderful design work.

Sylvain Runberg’s writing is excellent – I’m not a fan of exposition but something on this scale positively screams out for it, and Runberg manages to keep this not only interesting but entertaining, so you don’t feel like you’ve just sat through a lecture on the finer points of galactic issues. There’s a lot of cutting between situations with each separate incident continuing on a few pages later from where it left off; this gives it a very cinematic feel. His characters have depth, especially the two main protagonists Caleb and Mezoke, and there are times you honestly feel for them. Out of the pair I’ll have to choose Mezoke as my favourite character, which speaks volumes for the writing and the artwork if my favourite personality is a jet-black featureless alien. The stories are interesting, exciting and filled with tension and adventure, and Runberg manages to give us something huge but also very personal; the problems and dangers in the galaxy are thrilling, but you care about them because you care about the characters.

The pairing of Pelle and Runberg is what makes the volumes so strong as they suit each other’s style. Runberg writes on an epic scale and Pelle illustrates it with aplomb. Some of the human characters may seem a little cartoonish and the plots may jump suddenly from politics to adventure with no warning, with story elements changing or ending suddenly, but these are small gripes compared to the quality of the work on show here. 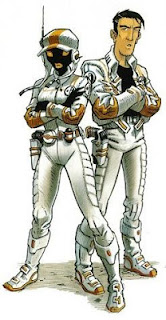 The setting is filled with so many ideas, possibilities and images that, as a GM, I can’t help but be inspired. There’s enough in these books to keep me in games for months, lots of little background details and ideas that jump off the page and demand attention. The Orbitals alone, huge dimensional gates that breach the space/time continuum in which artificial cities are built, designed to house up to 300 million individuals and in turn protecting them from the upheavals of the galaxy… that in itself screams ‘play in here!’ The background of the galactic organisation, the history of Earth and how it fares now, the attitude of certain races, the level of technology; it’s all here, and it’s perfect for gaming in. If ever a setting called out for a roleplaying sourcebook then this is the one; it’s the kind of thing Traveller was designed for.

The fifth volume ‘Justice’ is out in Europe now with an English translation apparently due in around 2014 – that may sound like a long way off but they intend to produce volume six straight after, so we’ll be getting a double hit of Orbital. I think it’ll be worth the wait. I’m just annoyed that I only speak English, but that’s my own stupid fault.
Posted by Farsight Blogger