Games I missed out on #4 - Judge Dredd: The Roleplaying Game 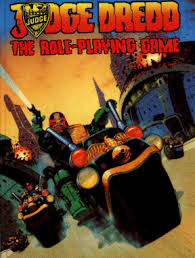 To be fair, I didn't really miss out on this game - I just used it for a different purpose. I'm a huge 2000AD fan and I've got two decades worth of comics, graphic novels, Casebooks, Best Ofs, Megazines and specials. And a signed issue from John Wagner, Alan Grant, Simon Bisley and Colin MacNeil. So, yeah, I'm pretty much into it.

The Judge Dredd RPG was released by Games Workshop in the 1980s and, as far as I can tell, did quite well. The system wasn't anything to write home about. In fact, it wasn't that good, being a basic roll-under-percentile-score system in which starting PCs had stupidly low scores. But, it was functional and could be modified quite easily (changing the Combat Skill score to the two scores Weapon Skill and Ballistic Skill a la WFRP solved many issues, and giving the player about fifty extra percentiles to divide up between the scores made them much more competent). I had the hardback book, not the boxset, and I used it quite a lot... for Strontium Dog games. My mates didn't really want to be Judges and with the mutation tables in the back it was perfect for a Stront game, and my mate Andy's Ralph the Goblinoid hunter had several months of fun.

The reason I missed out on this game is because I never used it for it's intended purpose, roleplaying as a Judge. I had great plans for playing Brit-Cit judges, and even had ideas involving the Apocalypse War and Necropolis. But these ideas never came about because we were having too much fun playing S/D agents.

I'd like to get hold of a copy of this game again, just the hardback rulebook. It was wonderfully atmospheric and captured the feel of 2000AD of the time really well. I'd love to have a proper go at it.
Posted by Farsight Blogger