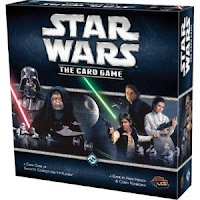 With the X-Wing Miniatures Game and the Star Wars: Edge of the Empire Beginner Game already on the shelves, Fantasy Flight Games hit us again with Star Wars: The Card Game.

Star Wars: The Card Game (SWTCG) is a Living Card Game (LCG). Like a collectible card game, a LCG is a game that allows for expanding card pools, enabling players to build customised decks, but does away with the rare and promotion cards that would give a player an edge; no longer will a game be decided on who spent the most money on the best cards. LCGs keep the games competitive and balanced.

The SWTCG core set is for two players – so you can get playing pretty much straight away – and comes in an attractive box 30 x 30 cm box of hard cardboard stock making it quite robust. The collage of images on the box is from the original trilogy, Episodes IV to VI, which is the era this game concentrates on. As with all Fantasy Flight Games products, the presentation is top notch, but it’s a large box that’s filled with padding; inside, the cards are stored in a narrow trench behind two pieces of card and only take up about one-third of the interior, and under these pieces of supporting card – the box is 7 cm deep – is nothing. It seems like a lot of wasted space for what is essentially a collection of 117 playing cards and some tokens. It certainly grabs the attention, mind you, and that’s what counts. I’m a massive Star Wars fan and it looks great on the shelf with my other stuff.

Inside the box you get; 24 cards (117 light side, 117 dark side, and 6 Force cards), 1 Death Star dial, nearly 100 damage, shield and focus tokens,1 Balance of the Force token and the Rulebook. As soon as you open the box, the first thing you see is a sheet guiding you to a video tutorial on how to play SWTCG on the Fantasy Flight Games website – if you want to skip to that right now and avoid my game description below, then go to www.fantasyflightgames.com/swcardtutorial - you can download the rules form the same web page if you want to have a good read. Next is the 32-page booklet of rules, which is very nicely illustrated and explains the rules clearly and concisely. The tokens are push-out thick card of good quality.

And them we come to the jewel in the crown, the cards themselves. Each card is beautifully illustrated with scenes, locations and characters from the movies. Each image is wonderfully reproduced on each of the glossy 6 x 9 cm cards, and in there is the legendary Ralph McQuarrie, the man who designed the Star Wars universe and that, of course, put a huge smile on my face. Each card is extremely well illustrated and would look great in a collector’s folder. There’s more than 100 of them, and with other packs out to support the core game on the way – ‘The Desolation of Hoth’ and ‘The Search for Skywalker’ – things can only get better. This is a Fantasy Flight Games strength being turned up to eleven; their artwork and presentation has always been some of the best in the business and here are artists illustrating some of the best known images in the world. It’s safe to say that the artists have excelled themselves and should be very proud, as the atmosphere and energy of the movies has been captured. There are a couple of images that aren’t 100 percent, but overall the quality is impressive. Most impressive.

So, to the game. The video tutorial or the rulebook download will explain this a thousand times better than I can in the space of this review but the basics of the game are this; as the game progresses the player controlling the Dark Side is already in almost total control of the galaxy and must destroy it’s enemies to finally rule over all. The Dark Side has a Death Star dial that is advanced at the beginning of each of turn. If the dial reaches to twelve, then the Dark Side wins.

The player controlling the Light Side can win by destroying three Dark Side objective cards. This takes firepower and this firepower is in the form of Unit Cards, made up of icons of the Star wars universe; characters, creatures, droids, vehicles, and starships. Event cards indicate an unexpected change with unfortunate incidents and other effects. You can enhance your cards with skills, weapons, and other items and there are other cards such as locations that can aid you. The idea is to increase your strategy, which will enable you to strike the objective cards; the quicker you do this the quicker you can launch attacks.

The system is quick and elegant and games can take around an hour. It says on the box 30-60 minutes but my first game took closer to 90 as we got ourselves familiar with the rules, but the following games were around the hour mark;’ it depends on how far the Death Star dial gets. It makes for a very intense evening’s play and I can easily say that the game is fun and exciting. The counters can get a bit fiddly as the playing table can be covered with focus or damage tokens and the like, which denote which cards are powered or damaged, and one cough or heavy sigh can upset things (I’m not kidding – that did happen). Also, they have to be cleared quite often and it can slow things down, which gets frustrating when the excitement levels are rising.

Star Wars: The Card Game is easy to learn, quick to set up and enjoyable to play. Each game is unique and the tactics you are able to employ are varied. There’s a lot of fun to be had with this game as well the gorgeously illustrated cards which would look amazing in anyone’s collection, much like the models that Fantasy Flight Games produced for their X-Wing miniatures game. There’s flexibility in deck building but then there’s always a level playing field. The core set will keep you going for a long time, but the game will need ongoing support to keep the game fresh and exciting.