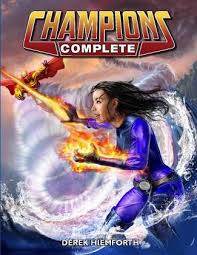 I’ve had some great experiences with superhero role-playing games. The ones I’ve played have been fun and exciting and I’ve had good times with KAPOW! style action, with capes flapping and fists flying, and I’ve had bleaker games, with moody heroes and dark happenings. Superhero roleplaying can be a lot of fun.

Champions Complete, using the Sixth Edition Hero System, appears to lean much more towards the KAPOW! style of superheroic roleplaying.

The rulebook is a 240-page softback with full colour covers and black-and-white interior. The type is no-nonsense double columns with normal fonts and the art, which is suitably comic-book style, is black and white line drawings. The interior is lacking in flavour in the vein that there’s nothing particularly inspiring or attention-grabbing; it’s all very functional.

Champions Complete tries to do two things – it tries to be both a superhero roleplaying game and a core set of adaptable rules that you can use for any genre. It accomplishes this quite well, using a table of Character Types ranging from low-level ‘Normals’ to high-level ‘Superheroic’, and the options you are given for these levels decide on the type of game you’re playing, and at the back of the book there are hints and tips on how to use the rules for other genres, such as fantasy, science fiction and contemporary. That in itself makes the book a good purchase as you can use it for pretty much anything you want to.

The game system is relatively simple – roll 3D6 and roll under the skill level to succeed. It’s quick and fluid and a pretty good little mechanic.

Roughly, the first 130 pages are given over to character creation. This may sound like a lot – and it is – but the character creation rules include a huge myriad of powers for superhero characters. The amount of options is both impressive and overwhelming, and on almost every page there’s a table. The first table is on page 9 and they barely stop coming. Characters are given a number of Character Points to spend on their PC, for characteristics, skills and powers. This brings us back to tables – the majority of them are simply detailing the Character Point cost for certain abilities, but the number of them makes character creation a long-winded affair. If this were a first-time group game, an entire evening would be taken up by character creation alone. My first character took just shy of an hour to fully complete as I made my way through the options, mostly making adjustments when I found another table with other options that I preferred. I’m sure, once you’re used to the system, character creation would be much simpler but for first timers to the system it can be somewhat overwhelming. For example, the Language skill has an accompanying table that allows forms of communication depending on how similar they are to each other, and it goes on to list each language, box them in certain shapes, and the similarity of the shapes determines the reduction or increase of the Character Point cost for that language – all that just seems incredibly unnecessary and adds complication. The blurb on the back of the book states that Champions Complete is ‘An excellent purchase for first time players…’, so I’m assuming they mean first time players of the Hero System and not roleplaying games in general, because this book really isn’t new-to-the-hobby friendly.

Once you’re past all that and you get into the game properly, the system is actually really very good. The lower-the-better 3D6 roll is nice and easy and plays well.

There’s an excellent section ‘Champions – Superhero Roleplaying’ that details the kind of comic-book game that Champions is trying to emulate and how to game in that genre. It talks about codes of conduct, secret identities, costumes and villains. It then goes on to talk about character origins, motivations and running campaigns. Backed up with examples and appendices, there’s plenty to keep the playing group going.  It’s a helpful section and has some good tips

One thing this book does miss is an introductory scenario. It would have been a good way to show GMs how the games hang together and how some of the rules could be implemented.

Champions Complete is a nice, easy game wrapped up in complication and options. Once you’re through character creation the system is really quite good, but it’s getting there that’s the hard part. Constant use resulting in familiarity with the game will no doubt make things a lot easier in time and many GMs will no doubt drop certain parts of the book to suit the game – in fact, the introduction of the book positively encourages you to do that and is in favour of creative freedom.

The 3D6 system is really very good and the different levels of character creation - which decides how ‘normal or ‘heroic’ your character is - is a good way to differentiate between the capabilities of characters. The fact that you can carry this over to different genres is a bonus and is an excellent idea. Although this book is geared towards superheroes, the system is robust enough to handle any genre, and in fact the back of the book explains how to use this rulebook for different genres. This makes Champions Completer almost a generic system core rulebook for the Hero Sixth Edition. Sure, there’d be some work involved to convert it to another genre – the book even offers some hints on what to leave out to emulate specific genres -  but the basics are there. You could get this rulebook and play anywhere and anywhen you wanted. That’s a bonus, and I like that in a game, the ability to use it for genres other than the intended one.

Where I feel Champions Complete lets me down is the sheer number of options available and even though it’d be easy to say ‘I won’t use that in my game’ the amount in character creation alone might make players think they’re being restricted and missing out on their perfect character if they’re told they can’t have certain things. The number of tables is daunting, there’s one on almost every page, and the handy index and the tables in the appendices make that easier but there seems to be a level of unnecessary complication attached to such a simple, easy gaming system. It says in the introduction that this is a lean, streamlined version of the Hero System Sixth Edition; that kind of surprises me, given the level of detail here. It makes me wonder just how comprehensive the Hero System Sixth Edition actually is.

All told, Champions Complete is a good book, and the fact that you can use it as a set of core rules for any game you want, at any power level, is a great idea. Players of the Hero System Sixth Edition will definitely find this a great companion for their games. The simple presentation and the possibly overbearing amount of options available isn’t my kind of thing but it’s a solid game nonetheless.
Posted by Farsight Blogger