Yes, because that title made a lot of sense. Old School Revival Dungeons and Dragons Sword and Planet using XXVc with some modifications.

I've been enjoying the Basic D&D recently and I've also bee having great fun catching up on old classic serials, like Buck Rogers (not the dodgy disco Buck, the original Larry 'Buster' Crabbe Buck), Flash Gordon (not the glorious 1980 movie, the original Larry 'Buster' Crabbe Flash) and Radar Men from the Moon with my old favourite Commander Cody. I've mixed that in with great movies such as 'Sky Captain and the World of Tomorrow' and 'The Rocketeer', and what I've come out the other side with is an idea for a space-faring D&D game. 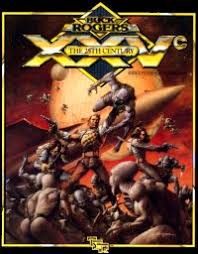 The Buck Rogers XXVc RPG already dealt with this a long time ago - I have the original boxset and lots of supplements and have played and enjoyed it - but that was AD&D based and the Buck Rogers name seemed to have been tacked on to a campaign world that didn't suit it. It was a hard-ish science fiction setting with the trappings of science fiction pulp adventure, down to the designs of the rocket ships, so it felt like two worlds colliding. I always said that they should have simply released the game system as the core rules for a TSR science fiction roleplaying game the same way they did for the AD&D fantasy core books, and Buck Rogers could have been one of the campaign settings for the game. There's no reason why that wouldn't have worked; apart from the slightly dicey rocket ship system, in which your skill as a pilot didn't really have much influence on how your ship performed, it was a solid, dependable system.

I'd like to keep the basics of D&D and shoehorn in the percentile skill system used in Buck Rogers XXVC because I've always thought that was quite innovative and worked really well. If I could get the percentage scores down to single digits as in modern D&D that would be even better, say divide the percentage score by 10 and drop the fractions, then just use a basic difficulty check target number of 15. The careers n the game and the character sheet should cover it all quite well.

There's D&D inspired games out there called 'Stars Without Number' and another called 'X-plorers' I'd like to get my hands on, as well as a new D&D inspired game on it's way called Warriors of the Red Planet that I'm very excited about, that will no doubt help me with that itch I want to scratch. In the meantime, though, I'll see how I get on with my trimmed-down Buck Rogers XXVc idea.
Posted by Farsight Blogger