I got my start in roleplaying games in the early 1980s with the wonderful world of gamebooks and the simple game systems that came with them. Once I’d mastered these simple games and gotten my head around the roleplaying hobby and all it’s facets, I moved onto more complicated systems, from six hour character creation sessions that covered all the bases to three hour long encounters, with pages and pages of tables and charts to add ‘depth’. There’s nothing wrong with games like this and I enjoyed them immensely – well mostly, at any rate – but as I moved into my third decade of gaming and time became precious I started to look back at younger, simpler systems to save time. Gaming sessions were few and far between and to spend one night a month playing out a single combat wasn’t my group’s idea of roleplaying; we wanted to cram as much as we could into the session.

One such simple gaming system I have come across is Precis Intermedia’s ‘Ancient Odysseys: Treasure Awaits!’ which advertises itself as an introduction to the roleplaying hobby. It’s a simple system that is supposed to suit new gamers to the hobby as well as veteran gamers looking for something a little smaller and flexible.

Just one thing before I start this review – I have here both versions of Ancient Odysseys: Treasure Awaits!, the 92-page pocket edition and the three-booklet boxset. The game content is pretty much the same, but I’ll be covering the boxset more than the pocket book as I do think it’s the better product. Any scores or opinions I give in this review will be for the boxset, but you can pretty much assume that the pocket book is up to the same standard of content. I see it like this; if you’re an old hand at gaming then the pocket book is for you. If you’re new to it all, then the boxset is for you.

The 92-page pocket booklet has full colour covers with black-and-white interior, and the paperback size means it’s more than portable. It’s laid out very well with very minimal art and has everything you need to get you started. 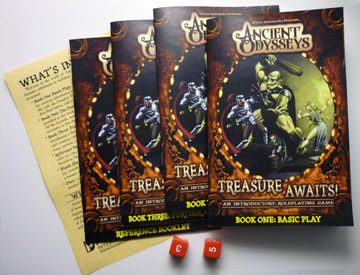 The box is a hard cardboard container of good quality, like a smaller version of classic boxsets, and has inside two six-sided dice, a ‘what’s in this box?’ one sheet giving you the lowdown on what you’ve got, a Basic Play booklet, a Dungeon booklet, a Further Adventures booklet, a Reference booklet with all the charts and tables you’ll need (it’s like a mini GM screen) a Conflict Action Map, and a selection of character and monster sheets. Each book has colour covers and a black-and-white interior.

There’s a brief introduction at the beginning of the book that lets you know what to expect in a roleplaying game and what it’s all about but this lasts only three pages. It covers the RPG hobby well and pretty much tells you what it is but for an introductory game it seems a little lacking. There are nice little examples called ‘Learn By Doing’ throughout the game and these are handy, so new gamers should get on quite well, all things considered.

The game can be played three ways; solo, group or group with GM. The game is designed with many random elements so you can roll for what is in a room, what monsters and treasures are in there, traps, doors etc, and then face off with enemies or deal with problems as they appear. This means that a single player can put their new player character through it’s paces, a group can get together for a random dungeon bash, or a bunch of gamers can meet up with a GM for a proper full-on roleplaying session. That’s a great little feature and it means that you don’t need to worry about who can and can’t make it to game night; you can roll up a random dungeon as you go with whoever turns up.

Character creation is very easy and takes minutes. You can choose from four races; human, elf, dwarf and hobbling. There are then three Vocations to choose from; Rogue, Warrior and Wizard and each gives different Pursuits (skills) to choose. Each character has three Ability scores, Fitness, Awareness and Reasoning, and these have a random number between 1 and 5 which can depend on race. Pursuits are the skills that a player can choose and there are 16 to choose form, each with a score between 0 and 3. Wizards choose spells, and that’s it, you’re ready to go. Character creation can be done completely randomly, if you want, but it’s easy enough to pick something you want and then roll randomly for other things, if you want. It’s very simple and you can create quite rounded and specialised characters. There’s a very simple post-dungeon experience award system that allows you to increase the abilities of a character, but not so much that you’ll max out on everything in no time.

Ancient Odysseys: Treasure Awaits! is a very simple roleplaying game that uses six-sided dice. You roll 1D6, add the applicable Ability and Pursuit ratings, and try to beat a difficulty rating the default of which is 7. And that’s it. There are a few little modifiers depending on certain situations and opposed rolls, but that simple mechanic is the basis of the game and one that will pretty much dominate. It’s quick, easy and intuitive and if you want a very quick decision on an average action you can just say something like ‘roll Fitness and Climb’ and the player will know what to do and just do it. It’s really quick and easy, and it’s also why it works well as a GM-less game as everyone knows what to roll and how it works.

There’s also a neat little Conflict Action Map that you can use to decide on who is doing what. Instead of trying to move pieces around the gaming table like an intricate chess game, what you have is a sheet of paper with five boxes on it, each one labelled. There’s ‘The Enemy’, where you put counters to represent the opposition to the PCs, ‘Closest’ where the players who are simply getting stuck in should be, ‘Farthest’ where the ranged players will be, ‘Sneaking’ where the players trying to flank the enemy will be and ‘Behind’, where the players trying to backstab will be. It’s a simple way to tell who is doing what, and what kind of Pursuits can be bought into play and what kind of bonuses the characters re entitled to. It doesn’t really support complicated encounters where there are multiple characters all over the place, but for simple face-off fights or GM-less games it’s really handy in that everyone knows what they’re doing and where they are during the fight.

There’s quite a generous sized introductory dungeon ‘In Search of the Lost Child’, and then there’s plenty of instructions on how to build your own dungeons for further adventures, with plenty of random tables, traps, monsters and ideas.

I’ve become a big fan of this game. I’ve played it solo and used it as an introductory game for someone who wanted to try out the hobby and I found it worked really well in both cases. I like the system as it’s quick, easy and intuitive, and I like the random dungeon design as if I’ve got an hour to kill I’ll just take out Wulfgun the Bold, my PC, and run him through a quick adventure just to see if I can get his stats up. As of writing this review, Wulfgun is recuperating after a nasty confrontation with a Gnome Reaver after getting through eight rooms unscathed - I’d like to wish him a speedy recovery before next Sunday’s game.

I would have liked to have seen more material aimed towards new gamers in there as I don’t think three pages explaining the hobby with a quick example is enough. It tells you what you need to know but I’m a big believer of taking complete RPG novices with no idea what to expect by the hand and leading them through the entire game step by step. That doesn’t reflect on the quality of the game and I’d have no problem handing the box to new players and telling them to have fun, but I would expect a lot of questions from them as they make their way through the game.

There’s a lot of playability in this and even though it’s aimed at one-off dungeon bashes you could get a great campaign out of this as player characters can be quite well-rounded, not so much with the social skills but that could be remedied. There’s nothing stopping you form adding extra Pursuits to the list to reflect that.

A great game with an excellent system, with ideas and options that could keep you going for quite a while. Highly recommended.
Posted by Farsight Blogger