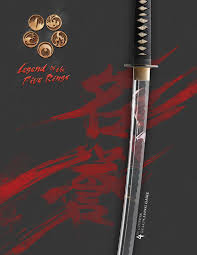 Pretty much all the fantasy settings I game in are versions of Dark Age or Medieval Europe, with all the trappings and pseudo history that entails. For me it’s instantly recognisable and easy to relate to as the culture and history are my own with many of the adventures based on the ancient myths and legends I grew up with. Medieval settings are second nature for me to GM and play in.

I only ever gamed in an oriental style setting once, and that was a side quest for a game that lasted only three or four sessions. I knew virtually nothing of the culture or the history of that side of the world and so played to stereotype to make my life easier. I didn’t put much thought into it and never really approached oriental games again.

Recently I’ve been absorbing Asian cinema while looking at many different types of settings as the standard Medieval setting, even though I love it, was starting to feel a little stale. Different books caught my eye, mainly Oriental Adventures for D&D and Land of Ninja for Runequest, but neither of these really caught the flavour of what I wanted to do.

After some searching I kept coming back to Legend of the Five Rings, a game that has been around since the late 1990s, and this 4th Edition marks 15 years of the game on the shelves. I’d heard much about it and so, finally, I managed to secure a copy.

First of all, just so that I get this out of the way for fear of constantly repeating myself and using the word ‘wonderful’ far too much: this is a gorgeous book. The 400 page hardback has matt black covers with a simple glossy coloured silver blade and red lettering. It’s incredibly stylish and looks wonderful on the shelf. The interior is full colour glossy pages with some wonderfully atmospheric artwork – the two-page spreads are wonderful - especially the map of the gaming world, Rokugan, on the inside of the covers. The font is easy to read, laid out in double columns per page. The production values are just amazing and I can’t think of many core rulebooks that look so great. Straight away, full marks to the guys who put this together.

The tome is split up into different books; Air, Earth, Fire, Water and Void. Each book deals with a different aspect of the rulebook.

First of all, the Book of Air gives the concise history and details of the land of Rokugan. Rokugan is a fantasy world based on an amalgamation of East Asian cultures, primarily Japanese. Whereas a general Western fantasy setting would be a version of European Medieval times, Rokugan is a fantasy version of East Asia with it’s own history and culture. There’s a lot of detail here about the history, the great Clans, the day-to-day lives of people in the land and the threat of the Shadowlands; they’ve gone to a lot of lengths to present an authentic setting, but they do make sure that the reader doesn’t confuse the fantasy world with the real history and culture of Japan, though if you do know anything about that it’d be a huge bonus.

The Book of Fire is the character creation section and it gives you everything you need; examples, choices of which Clan to join and how it affects you, a comprehensive skill list, advantages and disadvantages, spells and equipment. You can simply hand the book to a player and say ‘use the Book of Fire’ as almost everything the player needs is here to create and equip their character.

The Book of Water goes into more detail about the mechanics of the game, which at it’s core is a game about Samurai. It goes into detail about the Clans; what is expected of a player and the benefits of each Clan. There’s more detail on the Imperial families, brotherhoods and monks, even Ronin, and then it goes into optional rules for mass battles, how to use the concept of Ancestors in the game, and plenty of other options that’ll really fill out the experience.

Finally, the Book of Void is the Game Master’s section which helps with campaigns, gives plenty of ideas on playing Samurai and adventures. There’s an excellent section on ‘Asian versus Western Storytelling’, which gives an amazing insight into the role of heroes in the two forms and how a hero is perceived in Asian stories, what is expected of them and how they should act and their role in society. Where a western hero would be much more of an action hero, doing things his own way and blasting his way through badguys to be rewarded for his brute force, the Asian hero would strive to be a respected member of their community and fight against the corrupt and unjust to uphold their code. It’s not as black and white as that – there are plenty of exceptions to the rule – but the general idea the book is trying to express is not to treat the game as a general hack n’ slash dungeon bash and not to treat the player characters in the game as basic cookie-cutter Western-style fantasy heroes with katanas. Adventures, a character sheet and an incredibly helpful index rounds the book out.

Legend of the Five Rings 4th Edition is a very rare thing in roleplaying rulebooks – it’s a wonderfully produced and illustrated book with an amazing setting and a great mechanic. There’s plenty of stuff in here to create plenty of games, and the details they give of life in the realm, the Bushido code, the ways of the Samurai and all the other information that fills out the setting with so much flavour… you could run all kinds of adventures and even set it in the real East Asia, if you wanted. It’s not an accurate guide on the true cultures of the time – it’s a fantasy roleplaying game, after all - but it’s a great jumping off point and I get the impression that the game mechanics would support an accurate historical game well.

If I had to criticise I would say that it was somewhat peculiar to have the detailed rules and mechanics before the character creation section. In use that’s not a problem but initially reading through the book I had plenty of questions about where these skill and trait scores came from, or what their general values would be.

It might also be difficult to have your gaming group playing on the same page. The codes of honour and duty are ingrained into the book and even though you don’t have to stick to the principles of an Asian hero it might create a division in the group if some of the players are running characters that have Western sensibilities in Eastern trappings. It would certainly make for some great roleplaying opportunities initially but would no doubt become tiresome if players didn’t let go of their attitudes towards a character’s modus operandi. I guess it all comes down to the gaming group and the kind of game the GM wants to run.

This is a beautiful book to look at, an entertaining book to read and a great game to play. You really can’t ask for much more than that. Very highly recommended.
Posted by Farsight Blogger