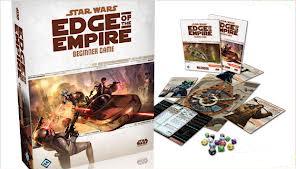 In August of 2012 the Beta softback book of the new Star Wars roleplaying game ‘Edge of the Empire’ was released to give excited fans a chance to preview, and be involved with the development of, the rules of the game. Four months on and they have released the Edge of the Empire Beginner Game, a boxset designed to not only introduce gamers to the system but new gamers to the hobby.

The box is a simple flip-top container with rulebooks, help sheets, character folios and a counter sheet. There’s also a packet of fourteen custom six-, eight- and twelve-sided dice.

Upon opening the box the first thing is a four page pamphlet saying ‘read this first’ in large letters. The sheet details the what a roleplaying game is, including a two-page script-style example, an example of how to use the maps and tokens and then finishing with the scroll up for the adventure book, ‘Escape from Mos Shuuta’. As with every book and pamphlet in the box the pages are glossy in full-colour, with excellent artwork. As ever, Fantasy Flight Games have outdone themselves with the presentation.

Moving on to the Adventure Book, marked with ‘read this second’, the adventure ‘Escape from Mos Shuuta’ begins after a brief introduction that has more information on roleplaying, the contents of the box and how to use the book in play. The entire book is the introductory adventure that acts as both a walkthrough of how a roleplaying game works and how the rules work. It takes the group through the adventure step by step, explaining how to use the different aspects of the adventure in play. There’s the general text that talks you through the adventure, coloured text to read to the players, more that explains the rules and then sidebar notes for extra information and advice. The adventure is split up into six encounters in the settlement of Mos Shuuta on the world of Tatooine, where they’ll fall foul of Teemo the Hutt; straight away we’re on a world that no doubt everyone knows and is familiar with, so setting the scene isn’t too hard. Each encounter takes the players and the GM through plenty of incidents that will need each of the rules in the book, making sue that everything is covered so that the group has been given a good runthrough of the game system. The starship combat encounter at the end rounds out the adventure and by the end the group should be well versed ion the rules and how they work. There’s a handy reference sheet on the back, too.

After this there’s a single sheet to read called ‘The Long Arm of the Hutt’, which acts as a sequel to the introductory adventure and is available as a free download from the Fantasy Flight Games website. On this sheet there’s also an advertisement for the Edge of the Empire Core Rulebook, a 400-page hardback book out in Spring 2013.

Next you’ve got the rulebook which goes into detail about the rules including more information on the game engine and how to interpret the dice rolls and advancing your character. There’s section for expanding combat, skills and talents, followed by equipment, starships and vehicles and a very modest adversaries section.

Then you have four eight page character folios; Oskara, a twi’lek bounty hunter. Pash, a human smuggler. 41-VEX, a ‘droid colonist. Lowhhrick, a wookie hired gun. Each booklet has duplicated stats with the initial character and the character that can be used in further adventures, another sheet for use and a talent tree. At the back there’s a brief character bio. These four characters are the only player characters in the box as there is no character creation system in here. More on that later.

The large poster-sized maps are next, with one side the adventure’s YT-1300 freighter in a landing bay, and the other of a cantina, the spaceport control and a map of Mos Shuuta. These are designed to be used with the bag of counters that finish the boxset, coloured markers of friends, foes, monsters and starships.

All in all there’s a decent amount of stuff in this box.

I’m not even going to bother to go over the quality of the product. The card of the box is little on the thin side but that’s my only gripe; the presentation is excellent and everything is clear and concise.

As an introductory game this is a good product, both for existing and new-to-the-hobby gamers; everything you’ll need is in here to be able to run a roleplaying session, and the adventure guides you through the game system piece by piece, explaining rules, offering advice and supplying options and hints. The character folios give you all you need to play a character and the rules are marked out clearly on the sheets for GMs and players alike. The first gaming session is an all-in experience as the entire group learns the game, so the GM isn’t swamped with pressure. This also means less prep time; if the group is willing to invest a chunk of time in learning the game together they can quickly move onto further adventures. There are other adventures that the characters can have, with a downloadable adventure from the Fantasy Flight Games website, and there are plenty of adventure seeds included to continue the game; you’ll certainly get quite a few games worth out of this as the system allows for the characters in the game to advance as they experience the galaxy. This is, of course, a jumping-off point into the full Edge of the Empire game.

My major problem with the boxset is that there are no rules for creating your own characters. The four characters supplied with the game are good and cover the basics of a mixed gaming group but after a while the players will no doubt want to play with something else, and create their own personalities. You can use new characters created from the main rulebook, including the Beta book, but there seems to be very little point. If the box had even included the basics of character creation, or a way to modify the pregenerated characters to suit a players preferences, then that would have added plenty of options immediately and extended the gameplay of the box. There’s nothing stopping gamers from adjusting the characters and their backgrounds, but having those very options or the character creation rules to hand would have been a bonus.

The Star Wars: Edge of the Empire Beginner Game is a very good introduction to the roleplaying hobby and Fantasy Flight Games’ newest RPG. It explains the rules clearly and, for old-school gamers like myself who like their dice numbered, it really helps with interpreting the symbols and their meaning. It also captures the feel and adventure of the Star wars universe really well, so even though I do feel as if the character creation rules should have been included to expand a gaming group’s options, I have no problem recommending this to new and experienced gamers alike.
Posted by Farsight Blogger