Fighting Fantasy - what got me started still keeps me going

As regular readers of this blog may already know, it was the Fighting Fantasy gamebooks that got me started in the gaming hobby. Fighting Fantasy led to Dungeons and Dragons, which led on to wargames, which led on to other wonderful things. Through all of these years of crazy I've never lost sight of the fact that it was the books created by Steve Jackson and Ian Livingstone that originally lit the touchpaper of my hobby and gave all that spontaneous creativity and wild imagination that I had built in my younger years form and meaning.

A couple of years ago, at the UK Games Expo, I had the pleasure of listening to one of their seminars as well as being the first person in the queue at the book signing, getting them to sign my copy of a first edition Titan: The Fighting Fantasy World (later added to by the wonderful Jonathan Green - I might make it a goal to get as many of the book contributors as possible to sign it!) and a copy of the anniversary hardback of The Warlock of Firetop Mountain.

A couple of weeks ago I joined a Fighting Fantasy group on Facebook. Jonathan Green had mentioned that there were almost 400 members and as I hadn't joined the group I thought I'd give it a try. Not only did I join I was also the 400th member, and as Fighting Fantasy gamebook players will know, the 400th entry in a gamebook usually meant the victorious conclusion to an adventure. I was 400! Hooray!

But it didn;t end there. Little did I know, the page was modded by the company Tin Man Games who were creating App versions of the gamebooks and as the 400th member they had a surprise for me. They asked for my address and I waited with excited anticipation to see what would come through the post. And a week later I get signed postcards from Steve Jackson and Ian Livingstone, both of which are now framed and sitting proudly in my hobby room. 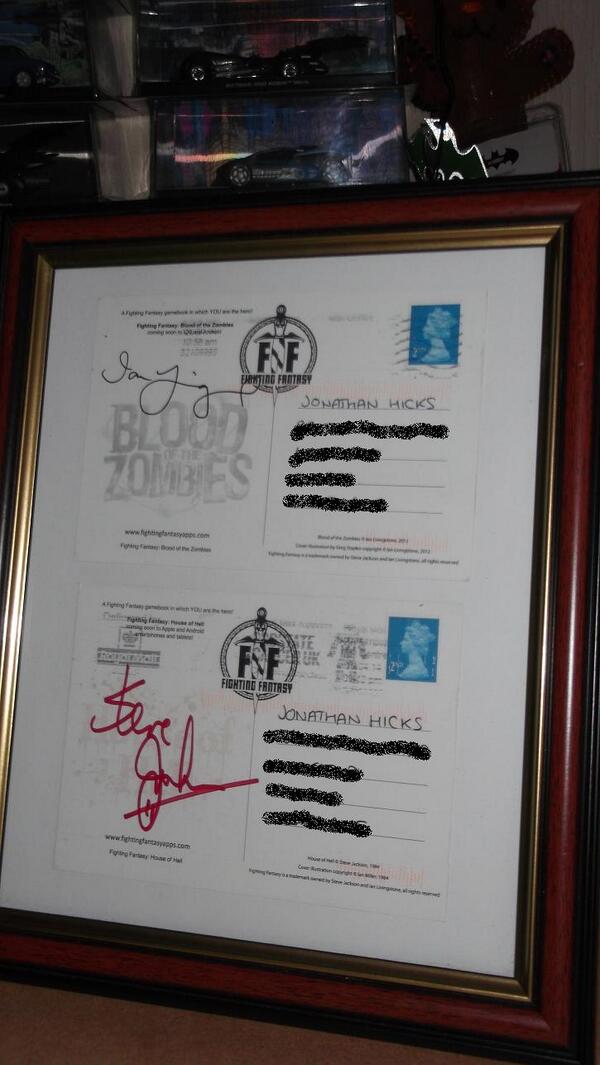 There was also a gift from Jonathan Green, but I'm going to keep that one under my hat for a while. I'm geeking out just thinking about it.

I love my hobby. I also love that the thing that got me into it 31 years ago is the very thing that's keeping me excited about it at a point where time and responsibility is reducing my involvement.
Posted by Farsight Blogger