The wonderful Mark Newbold of http://www.lightsabre.co.uk/ has sent me this review of 'District 9' - I can't wait to see this... 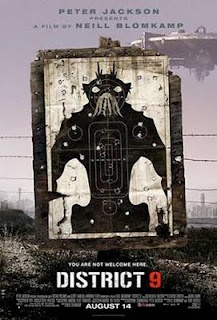 There are some movies that arrive on Earth and make an indelible imprint as soon as they’re projected onto the screen. Star Wars, Alien and Blade Runner are obvious examples and now you can add to that short list District 9.
Written and produced by South African director Neill Blomkamp - the man who brought you the Citroen Transformer-style adverts a few years back – it tells the story of an alien race who pitch up above Johannesburg in 1982 lost, alone and 3 billion light years from home. But these are no ordinary E.T, these are worker drones from a mining civilization who have become detached from their leadership and now, malnourished and weary, have simply nowhere else to go.

Pity for them that they park above Joburg as the old apartheid ideals soon kick into action swiftly and the aliens are herded into what is known as District 9, a ghetto on the edges of town where the Prawns, as they become known, are exploited by Nigerians who want their body parts and by Multinational United (MNU) who have their hands on the alien tech but can’t use it as it is genetically coded specifically to the Prawns DNA.
Enter Wikus van de Merwe, an MNU field operative assigned to lead the relocation of the aliens away from District 9 to District 10, far away from Johhanesburg.
In a brilliant turn by newcomer Sharlto Copley, van de Merwe becomes accidentally embroiled in the fate of the Prawns – specifically an alien named Christopher Johnson and his son - when he is sprayed with a black liquid that starts to swiftly turn him into one of the Prawns, and subsequently makes him the most wanted man on the planet as he is now able to use the alien weaponry and make MNU billions on the weapons market.
What is so fantastic about the film – other than the deftly shot documentary footage, the flawless special effects and the strange fact that swearing in a South African accent is inherently funny – is that Wikus is never portrayed as ‘the hero’. In a story that echoes The Fugitive in many ways, he is on the run trying to find food and shelter and constantly petrified when he sees the next step of his evolution. It’s a brilliant performance by Copley, from his almost nerdish first appearance as an MNU operative to his final shot as…well, that would be telling.
There’s no doubt Blomkamp is here to stay with this first effort. Peter Jackson produced the film after their failed attempt to bring computer game Halo to the screen, and showed Blomkamp a lot of loyalty by standing behind his decision to adapt his short film Alive in Joburg for the big screen. But it’s paid off, with a unique and tough vision of an alien arrival gone terribly wrong marking his entrance into the big leagues. And with a budget of only $30 million and a worldwide return of $120 million he’ll soon be back with a bigger budget and name stars.
Then again, having seen this first effort work so brilliantly don’t be surprised if his next is the same budget with a cast of unknowns and he weaves some more magic on all of us.
And what of District 10? Blomkamp has hinted heavily at a sequel, which seems very likely as Christopher Johnson and son leave earth promising to return in 3 years. If these are the worker class, what of the next level of Prawn bureaucracy? Will they return to earth in peace or anger? And what will they want? Domination, or cat food…