THE THING FROM ANOTHER WORLD

This is one perfect for late-night viewing, when you know you don’t have to get up for anything the next morning. 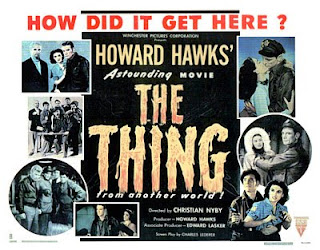 ‘The Thing From Another World’ is a 1951 classic. Based on the John W Campbell Jr. story ‘Who goes there?’, the movie has an excellent ‘you’re trapped and there’s Jack Shit you can do about it!’ plot. A mix of military personell and scientists all gather at a remote arctic base, only to be cut off from civilisation by the weather. How convenient. Add to that the discovery of a flying saucer and it’s thawing inhabitant… it’s just a recipe for disaster. And a great movie.

After the incredibly creepy opening – the title literally melts from the screen - the script is the first thing that leaps out at you. The conversations are crisp, curt and snappy, with several characters talking over one another, usually about different things. It’s like the director, Christian Nyby, stuck a camera in the room and told the actors to make their own cues. It’s very clever and adds a sense of realism you don’t find in many 50s sci-fi films.

Apart from the monster being a tall guy in a bad suit the film is exceptionally well made. There are two major moments where I get goosebumps – when they find the flying saucer under the ice and make a ring to judge the size of it, and when they’re observing the plants later on. Brilliant setpieces in a well-realised and made film.

John Carpenter made a fantastic version of it in 1982 and made full use of gore and psychological torment, and even the X-Files did a trapped-in-arctic-who-is-the-killer episode in their first season, but this is the best. It’s the best because it did it first, and because a very clever and atmospheric bit of filmmaking got into the minds of audiences by disguising itself as a 1950s sci-fi B-movie.