LEGEND OF THE SEEKER

Now, I quite liked Hercules: The Legendary Journeys and Xena: Warrior Princess. The mix of humour, action and tongue in cheek dialogue was fun and the shows never took themselves too seriously. Yes, there was major drama and some shocking leg-breaking stuff, but this was melodramatic for an over-the-top show and the material worked for it. They were fun.
Now, along comes a new fantasy show by the same producers, Sam Raimi and Rob Tapert - Legend of the Seeker. 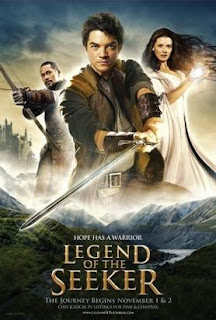 Based on Terry Goodkinds 'The Sword of Truth' series of novels (that I've never read) It's a bit more serious than Hercules and Xena, although it is shot in New Zealand against Lord of the Rings-type scenery like those two shows, and as such it's easy to see the influence that the previous Raimi/Tapert shows and the Rings Trilogy have had on this. Visually it's taken a few cues from Lord of the Rings, with a few tinted shots and some great sweeping visuals of the New Zealand landscape, and it seems to have the sensibilities of Hercules/Xena, with fast-action fight scenes and some small sets substituting large towns. The costumes are excellent - I especially like the design of the armour the bad guys wear - and the special effects are (thankfully) minimal.
The actors all play their parts well - special mention here about Bruce Spence, who makes an excellent wizard - but there's nothing outstanding about their performances. I'll put that down to early days in the series (I've only seen up to episode 8). There's old tried-and-tested male/female leads in the will they/won't they situation. I could have done without that, that's kind of an old and tired concept. Something else I could have done without is the slowdown during the well-staged fight scenes... the action slows when there's about to be a strike or a special 'jump through the air with your sword in the air like you just don't care' move. It was quite effective in the first one or two episodes. Now it takes place in every fight scene, and it's a bit annoying.
All in all an enjoyable show, one that I'll carry on watching and see where it takes me. I hope the characters are fleshed out a little more and that the action slowdown is saved for battles that actually mean something and are not used up on average swordfights against generic stuntmen.
Posted by Farsight Blogger