The more I read about Pathfinder the 3.5 'fix' or, more accurately 'successor', RPG from Paizo Publishing, the more I'm intrigued by it. So much so, in fact, that I've even considered a purchase. 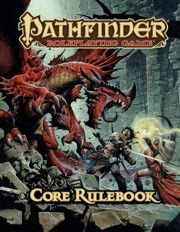 I cut my RPG teeth on D&D Basic, which I enjoyed. Then I moved on to AD&D 2nd Edition which I did not like at all - in fact, I disliked it so much I stopped playing D&D altogether. Twenty years later I began playing 4th Edition, which I thought was good apart from the overpowered low-level characters and the at-will/encounter/daily powers which I felt complicated things, and now I'm looking at Pathfinder, which sounds like it may have fixed a lot of the problems people had with 3.5 - as long as it's better than 2nd I'm fine with it. My aim is, of course, to be able to run a D&D style game.

I still intend to run a Dragon Warriors game as I want to play something fast and fun, but if I create something vast of my own, such as a campaign world, I'll want to use something a bit more widely used. D&D, of course, is the model and Pathfinder sounds like it might be my cup of tea. Right up my street. Up my flagpole. My kinda thang. Quids in. Bee's knees. Dog's... never mind.

Anyone have any thoughts or experience with this game?
Posted by Farsight Blogger