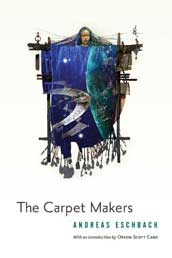 'KNOT AFTER KNOT, DAY IN, day out, for an entire lifetime, always the same hand movements, always looping the same knots in the fine hair, so fine and so tiny that with time, the fingers trembled and the eyes became weak from strain-and still the progress was hardly noticeable.'

I first read this book a few years ago, just after my son Bruce was born. It was the book I read during his first two weeks of freedom from the womb and, in between the nappy-changing and feeding, I sat with my son in my arms and read The Carpet Makers.

'Since the time of prehistory, carpet makers have tied intricate knots to form carpets for the court of the Emperor. These carpets are made from the hairs of their makers' wives and daughters; they are so detailed and fragile that each carpet- maker finishes only one single carpet in his entire lifetime. This art has descended from father to son since the beginning of time itself. But, one day, the empire of the God Emperor vanishes... and strangers begin to arrive from the stars in search of the hair carpets. What these strangers discover is beyond all belief, more than anything they could have ever imagined... '

A string of open-ended and seemingly unconnected stories are - dare I use the pun - 'woven' together to create a universe so compelling, so shocking, that it is only now that I have decided to pick it up and read it again.

I can't recommend this book enough. The Carpet Makers is a story so rich in detail and depth that it practically is a door to another time and another universe. The stories are all connected but each one is also a snapshot of the life of a subject of the God Emperor, the man who has, as far as anyone is concerned, ruled the universe for all time. People familiar with vast universes of Paul Atreides or the Emperor of the Warhammer 40K Imperium will find the setting familiar, a vast galaxy-spanning Empire that's almost inconcievable in it's size and influence.

Andreas Eschbach creates characters with surprising depth in the few short pages that they have and that's a mark of quality writing; if the author can draw you in with nothing more than a few pages of story, detailing a character who won't be mentioned again for the rest of the book and still carry the overall story along with careful attention to the core idea... it makes me wonder what a full length uninterrupted novel must be like. After reading this, I can't wait to find out.

This is the reason why I waited for several years before reading it again; the sheer size of the concept and the reason for the existence of the carpet makers was staggering and it took me a long time to even begin to grasp the enormity what had happened in the pages of the book. This means that I can't even hint at the plot of the book without giving some small fact away that might ruin it for you. You'll just have to trust me and get a copy and find out for yourselves.

This is a huge book in every sense of the word, starting small but slowly building into an explosion of epic proportions; Andreas Eschbach takes you by the hand and slowly walks you through his world before dragging you into the finale. This is an excellent read from an excellent writer and I am definitely going to hunt down more of his work.

I urge every science fiction fan to buy a copy and lose themselves in the Empire of the God Emperor and his carpets made from human hair.
Posted by Farsight Blogger