Hold on - have I reached the level of Role Playing Grand Master?

I've been having a fond look through my old gaming books and I dug out Gary Gygax's book Role-Playing Mastery, in which he offers all kinds of hints, tips and ideas to help improve your roleplaying experience. He knew what he was talking about, did Mr Gygax, and even though some of it doesn't really speak to the way I game anymore there's still some great stuff in there.

I was flipping through it and I came to the back of the book - 'An Overview of Progress Toward Mastery'. Here it listed the things that a player should attempt and conquer to reach a level of a Grand Master roleplayer - yeah, I know, it's a bit daft and being a 'Grand Master' in a hobby so subjective as tabletop roleplaying is something of a silly concept. Still - I wanted to see what Gygax himself considered as the pinnacle of gaming so I pressed on.

INDIVIDUAL EFFORT AND PLAYER MASTERY - Oh, yes; from Fighting Fantasy to Basic D&D and beyond I've definitely learned a lot and know what's expected from me at the gaming table. I even wrote articles about it, and published them in a book

PLAY GROUP EXCELLENCE AND MASTERY OF THE ROLE OF THE GAME MASTER - I can certainly say that this is true; after 30+ years of gaming I've mastered a lot of systems, especially Star Wars D6 and Warhammer FRP. I've played in them and run them for many different groups and players over the years.

CONTRIBUTIONS TO AND MASTERY  OF THE CHOSEN GAME SYSTEM - As the chief GM of almost every game system I ran in the 1990s and 2000s, with my games being actively sought after in the 1990s especially, then I can say this is true. Or maybe it was because I was the only GM for miles around... no, I'm going to go with my ego on this one.

CONTRIBUTIONS TO AND ACTIVITY WITHIN THE GREATER GAMING COMMUNITY - I ran convention games, I put on my own convention GammaCon, I reported on other conventions, ran my own store, ran RPG workshops and introduced dozens of people to the hobby, I edited my own webzine, I got involved with the industry on several levels and I take part in the community via this blog and other mediums. Yes, I'd say that this was covered.

So... is this it? Have I attained the level of Roleplayer Grand Master? Well, according to Gary Gygax - yes I have.

So therefore, I am: 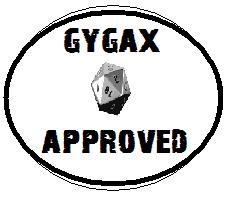 * And no, before you say anything I'm not being serious - I just remember reading this book way back in the 1980s and thinking 'Wow, I'll never get to that!' because I took it all far too seriously. It all seems quite quaint, now.