‘The tale of a forgotten crusade, erased from history because it fell into the shadow of the devil.

Jerusalem is in the hands of Sultan Ab’dul Razim, and the Christians have raised an army to take it back, led by Grégoire of Arcos and the Duke of Taranto. Only Gauthier of Flanders and his sister-in-law Syria of Arcos are opposed to an attack they deem premature. But the stench of brimstone covers everything, and in a war fought in the name of God, it is the Qua’dj, a demon, who could decide the fate of the Holy Land…’

‘Crusade’ immediately grabs the attention with some stark cover art – a crusader knight standing over a corpse with evil in his eyes, and the land around him dark and desolate. They say you shouldn’t judge a book by its cover but this striking image is very enticing, and the actual graphic novel itself doesn’t disappoint.

This 56 page full-colour graphic novel is the first in a four-part series. There’s a handy opening that details the historical crusades that sets the scene and the atmosphere of the upcoming tale so reading up on the reality of the holy wars is not a necessity, although having knowledge of the crusades certainly helps. Reading the stories of both sides and how the war and the influence of the evil affects them certainly makes for an intriguing story. As this is the first part of the series nothing gets resolved, it just prepares you for the next step in the saga and sets the scene characters and situations that will follow. Nevertheless a lot happens in this volume, what with the politics and theology on both sides, so it’s a very satisfying read.

Jean Dufaux’s writing is very good and there’s a nice mix of narrative and dialogue; narrative where you need it to keep up and uninterrupted dialogue when you want it. The conversations have little in the way of exposition except where needed to be able to follow the story so it’s a good read, and has a movie script feel to it.

Philippe Xavier’s art is excellent and some of the vistas are impressive, especially the first view of The Holy City and the two-page charge into battle, but there is something slightly lacking in the expressions of the characters. Although they are well defined so that they are identifiable there seems to be no real expressions of emotion on the faces, at least expressions that aren’t highlighted by the story and dialogue; they all seem to be either surprised or moody. This suits the darkness of the story, that’s for sure, so it certainly doesn’t distract from the unfolding tale or the excellent artwork. 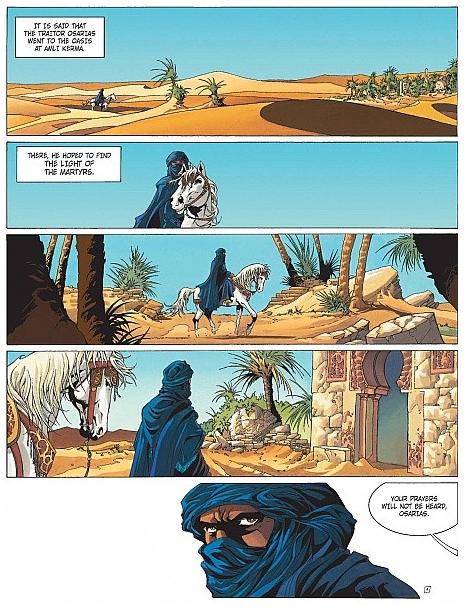 Crusade 1: Simoun Dja is an excellent first volume in what promises to be an excellent series. Cinebook has succeeded again in enticing me into sticking with another great title.