Welcome to the ‘Experimental Paradigm of Cinematic Horror’ – or EPOCH, the character-drive survival horror roleplaying game.

EPOCH emulates pretty much one thing; those horror movies in which a bunch of people get thrown in to a horrible situation, usually involving monsters, aliens or crazed slashers. You know the films; ‘The Cabin In The Woods’, ‘Alien’, Jason and Freddy movies… pretty much any movie where the protagonists are picked off one by one by a scary, dangerous foe that’s supernatural, insane or out of this world. Or worse, all three. Have you ever wanted to set up a quick game where your players take the role of these unfortunate fools that get themselves into this dire situation? This game lets you do just that, but there’s an elegant little twist that decides who lives and who dies by the end of the game…

This card-based game from Imaginary Empire is a nice little 147-page softback book with colour covers and a black and white interior. The print is easy on the eye and the art, while sparse, is attractive and suitably gruesome. It’s a great little book that’ll fit nicely in your gaming bag in case you need it at a moment’s notice and takes up little room, so you can always have it with you if you need it. The copy I have also came with the card deck that you’ll need – these can be downloaded and printed as a PDF or ordered as a POD. There are 130 cards in total, more than enough to suit even a moderately large group although six is the perfect number (and I suggest getting the POD cards as they’re sturdy, well made and you’ll get a lot of use out of them).

Playing EPOCH is easy and, most of all, a lot of fun. Games are split into Tension Phases, where investigation, character interaction and general gaming takes place; and Challenge Rounds, where the characters are faced with an obstacle or threat that they must overcome. Let’s take the movie ‘Alien’ for example – the Tension Phase is the buildup; waking up to find that you’re still eleven months from Earth, Kane, Dallas and Lambert going into the hold of the crashed ship, trying to get the Nostromo operational again. The Challenge Rounds are for when stuff happens; Kane attacked by the facehugger, Brett attacked by the alien, Dallas attacked in the vents. The pressure is built during the Tension Phase and the Challenge Round releases that pressure as a dramatic explosion.

This is where you get to play your cards – there are no dice with EPOCH.

Cards, when played, help the story along and decide when a character lives or dies (or worse). They detail your traits, strengths, and weaknesses, and they detail the relationship that you have with the other player characters – family, friends or colleagues. All of these cards can be used to help yourself, help others or hinder others. I can guarantee that everyone will be dead by the end of the game except the player who played their cards cleverly, secretly and most of all dramatically. It’s part of what makes EPOCH a lot of fun – not only do you get to roleplay and run around having screaming fits about anti-social aliens and killer clown with axes, you also get to play a cunning game of strategy as you try to be the one who makes it to the end of the scenario alive. This is perfect one-shot material, and the game rules are simple and well explained so you could have a game up and running very easily at a moment’s notice with gamer friends who have never played this before. It’s perfect for single quick games and ongoing stories that might even feature the survivor(s) of the previous game - it’s no wonder it was nominated for 3 ENnie Awards including Best Rules, Best Electronic Book and Product of the Year. 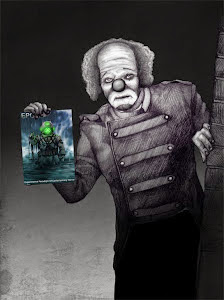 The three scenarios that come in the book, ‘Fever Pitch’, ‘Sunshine Falls’, and ‘Price Slash’ cover the basics of the most popular horror flicks. There are others you can download, too, but it’s very easy to create your own based on your favourite horror movies. Up to yet I’ve run games inspired by Alien, It, War of the Worlds, The Evil Dead, Critters, The Walking Dead and a whole bunch of Cthulhu Mythos adventures. It really covers everything.

Not only that but there’s a lot of information and advice at the beginning of the book regarding running and taking part in games; this covers the distance between a player and their player character and how the closer they are together equals a much more immersive game, how GMs can get their players much more into character and to invest more into the personality they are playing, how to deal with those moments where problems arise that might ruin the atmosphere and how to manage the game with notes and proper preparation. Its really good advice that relates to immersive gaming in general and not just to EPOCH.

EPOCH is an excellent game that suits its horror movie subject matter perfectly. It has an incredibly clever system and a unique approach to narrative in which the GM, the players and the cards that are dealt all influence the outcome of the game. This requires the group to think fast and be on their toes and for the GM to be able to react to sudden changes in the flow of the story, but the nature of a horror survival flick – a small group in a small location with few avenues of escape – certainly makes this much easier to control.

Great fun and a great way to spend an evening with like-minded friends. Highly recommended.