Good Cop Bad Cop is the new title from Planet Jimbot, the independent publisher that bought us the excellent ‘Amongst The Stars’. Where their previous title was some serious science fiction this new title takes us to the dark underbelly of modern day Scotland with Detective Inspector Fisher.

As this is the first issue there some scene setting being done. We get to see Fisher ‘in action’ – that is, he has a Jekyll/Hyde personality that he seemingly allows to happen, the darker, violent nature of his personality coming out when under pressure or threatened. There have been consequences to these outbursts and he’s obviously feeling the strain. His investigation goes from a robbery to a kidnapping which don't seem to be connected...

Meanwhile, a man is tortured in the middle of nowhere by a man and his dogs, and we don’t know why except that the man doing the torturing seems to find justification in his actions, almost as if he’s convincing himself that what he’s doing is for the best...

The story switches between the two incidents and, as this is a first issue, you don’t get the full gist of exactly what is going on. The writing is sharp and crisp – there’s a great ‘Salt and Vinegar do you?’ line that made me laugh – and the dialogue feels natural and certainly gets your attention. No long drawn-out conversations here, just quick and to the point. There’s a moment when you’d like to know exactly what is going on and why, but this is the first issue and there’s no doubt going to be clarification later on. This is simply setting the scene and the characters. 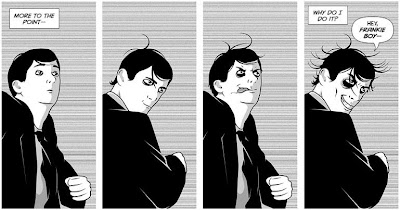 The artwork is very clean and functional, with some very stark black and white images with shades of grey. Its very good art with some computer highlighting, like forced blurring which gives a nice sense of depth. I do feel that this kind of story calls for something a little more detailed and dirty. The artwork here, while very good as you get a real sense of expression on the faces of the characters so it’s not just the words that convey the atmosphere and emotion, seems a little too sharp and clean for a story trying to show the grim darkness of the characters and the things they do. The shading is very good and gives it a wonderful noir-ish feel. I’d like to see Luke Cooper's great art illustrate a gumshoe 1940s story, a private dick in the big city.

I enjoyed this, and a re-read had me appreciating it even more. As a first issue Good Cop Bad Cop: Tiny Acts Of Kindness felt a little lacking at first as I never really got an idea of exactly what is going on, but the mystery of that in itself is enough to make me want to move on to the next issue. I want to see more of Fisher, who and why he is, and more of the strange man with the vicious dogs that he loves so much. 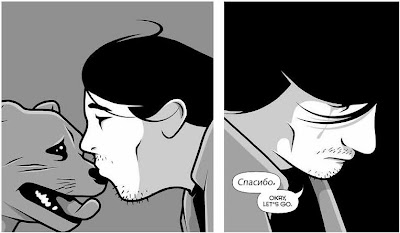