Nerd Stuff I Kinda Forgot I Had: Part 3

It's an Imperial seal of purity, man! And it's magnetic! 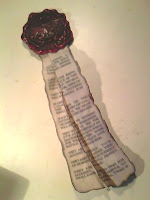 When the computer game Space Marine came out I absolutely loved it - I had it on PS3 and the gameplay, story and music was just great. Yeah, it got a bit samey in some places but the story and characters really worked.

In fact, the cutscenes were a thousand times better than the God Emperor-awful 'Ultramarines' move that came out, the official Games Workshop WH40K film (I was going to review that 'movie' but too much negativity gives me the shits).

In the collector's boxset for the game was this, an Imperial seal, the sort of thing you'd see hanging off the armour. I never bought the boxset, I was given this by a great mate who knew that I coveted it.

It's a great little piece of kit, with the litanies on the ribbons and the mock-wax seal looking the parts. And did I say it was magnetic? Cool! I'd stick it on my power armour, if I had any. But I don't. Because I'm not an eight-foot tall genetically manipulated super soldier.