I've got quite a bit of credit on DrivethruRPG, so I thought I'd get hold of a couple of books on POD that really grabbed my attention recently. 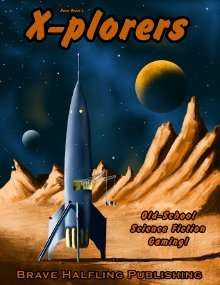 The first is 'X-plorers RPG' from Brave Halfling Publishing. I had a look at this a long time ago and I returned to it recently, and even though I got hold of a free PDF copy I really wanted the POD book as it looked really retro. I do like the cut-down OSR system and it seems to work really well.

"The Universe is a big place with big problems - that's where you come in!

Put on your space suit, charge your ray rifle, and flip ignition on an outer-space adventure!

Here is a simple RPG of interplanetary adventure, rules-lite, fast-paced, and inspired by a passion for science fiction. In X-plorers, you're part of a group of galactic troubleshooters on the look out for the next job-whether it be salvage, search, or rescue on an alien world.

Players: Explore, defend, and save the galaxy!

Be a SCIENTIST: Unravel the mysteries of a new alien race!
Be a SOLDIER: Take aim and defend against enemy invaders!
Be a TECHNICIAN: Pilot a spaceship through imminent danger!
Be a SCOUT: Foil the overlord's plans using espionage!

Character generation is quick and easy so you can get to gallivanting around the galaxy.
Choose from four character types with a simplified four-attribute skill system. Then outfit your team and prepare to make planetfall!

The second book I went for is 'OneDice Space' from Cakebread & Walton. Apart from the cracking book cover, this game is a simple six-sided die system and, as I'm really drawn to simple systems at the moment, this was another game I liked the look of.

OneDice Space is a game of space travel and adventure. If you want to play space games in a universe of your own devising or adventure in the ready-made futures described within, all the rules you need are in this book.

Whether you want to play shady traders in a beat-up cargo ship, the captain and crew of a massive exploration vessel, rebels fighting against an evil galactic empire or artificial intelligences downloaded into cyborg or uplifted animal bodies, there’s something in here for you."

No doubt the PDFs would have been cheaper but, unfortunately, I can't read a screen for any length of time and I'm a bit of a grognard when it comes to gaming books and anything over 12 pages has to be printed so that my head doesn't explode with the migraine.

The last PODs I got from Drivethrurpg were for the Star Frontiers books 'Alpha Dawn' and 'Knight Hawks', which were printed directly from the PDF and were of pretty good quality. I'm looking forward to getting hold of these books and checking out the quality. I'll post again once I receive them.
Posted by Farsight Blogger