I hadn't bought Dragon magazine for a long time as I was reading a lot of White Dwarf magazine before it became focused on Games Workshop games, but issue 126 in late 1987, with Daniel Horne's amazing cover, quite literally leaped from the shelf and landed in my lap. 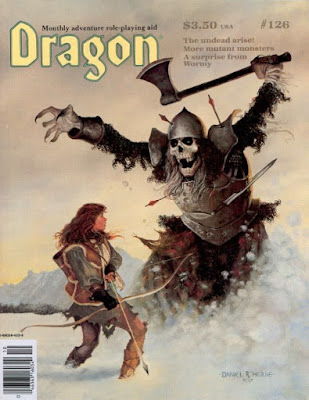 I love it because there's a story in there; there's so many ways you can interpret this image as a huge skeleton warrior looms over a lone warrior. Now, it appears that she's had a right old fight with this thing. There are arrows stuck in the creature already and there's a sword jammed into it's armour - I'm assuming she's the cause of all of that - and she has an empty quiver with a single arrow on her bow. I'm hoping it's a powerful arrow as the cock of the creature's hand tells me he's about to deliver the killing blow and she's been through a lot already, what with her torn leggings and empty quiver. It's quite an encounter, but who will be the ultimate victor?

I've loved this image since I first saw it. I originally thought the creature was bursting from the snow in ambush but the closer I looked the more I saw. This is the climax of a long battle; she's got some hits in, even one through the head, but the damn thing just won't go down. I could feel the cold coming off the image, and the detail is excellent. Also, it was one of the first images in my hobby where I saw a lady in action instead of an unrealistically dressed woman in form-fitting armour standing like she's posing for a photograph (or whatever appealed to young men at the time).

It's a fantastic image and I based an encounter on it, in a D&D game set in Icewind Dale. As soon as the encounter was over one of my players said, 'Why am I thinking about Dragon magazine now?'

I parted with my entire Dragon magazine collection years ago. This is the only issue I kept.
Posted by Farsight Blogger