There's so much going on in this image it gave me adventure ideas for a long time. I never played the boardgame but I do remember seeing the image in Games Workshop's 'White Dwarf' magazine and being bowled over by the painting. 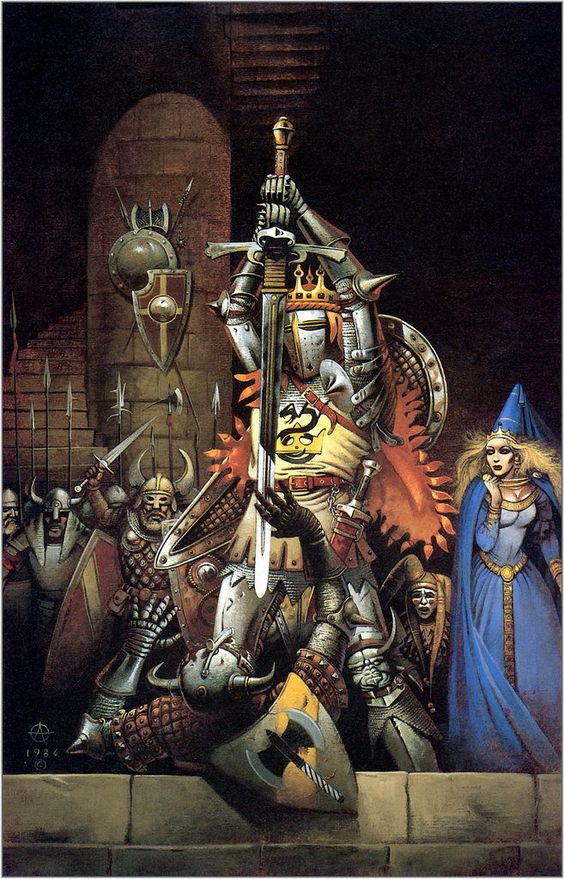 Chris Achilleos has always been a favourite of mine and has produced some of the best covers of some of my favourite games and books. This one in particular came along at a good time for me; I was between campaigns and could not think of a new adventure, but after seeing this image I ended up running a long War of the Roses-type game.

The main foreground image of the two warriors, especially the big dude with the sword, is tremendous. Even with all the pageantry and heraldry on the clothes and armour - this grandiose statement of apparent nobility - the act of bloodshed and the lack of mercy is still a brutal and nasty job. There is no compassion in this knight as he prepares to plunge his sword into an unarmed foe. The lady looking on with part shock and part anticipation is very telling and the only person who seems even slightly horrified is the jester, the one person in the room whose opinion everyone no doubt disregards. The act also appears to be the start of something bigger, what with the warriors in the background preparing for action.

This is a fantastic image and I found it inspiring for all kinds of reasons, especially the gaming angle of warring nobility and the duty of warriors.
Posted by Farsight Blogger