So, I was thinking about doing a near future campaign with the players taking on the role of runners of the shadows (see what I did there?). One of the things I'd considered was the PCs getting past the multitude of security cameras that constantly watch us every day and that they would need to take this into consideration. That made me think about how far we had come in the age of surveillance and the different ways the PCs could be filmed; street cameras, shop cameras, ATM cameras and even home video cameras.

Then some friends found this on Google and emailed it to me. 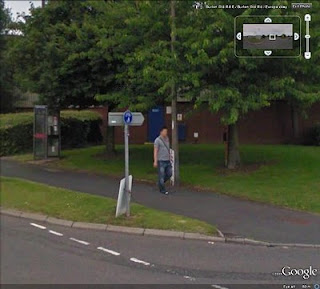 That's me, walking to work one morning of last year and unknowingly having my picture taken by Google Earth. My players won't have a chance in the modern world, let alone a near future one.
Posted by Farsight Blogger