The fantasy role-playing game Dragon Warriors has a healthy following and the Lands of Legend have been around for many years; as such there are a lot of stories to tell from around this vast pseudo-mediaeval land and more than enough places to visit and people to meet. With that in mind, a small group of Dragon Warriors fans - following the lead of Bill Edmunds who volunteered himself to produce the magazine - decided to produce a fanzine dedicated to the game, to include articles on locations, new professions, creatures, adventures and all sorts of stuff to support the Dragon Warriors line. Toward the end of 2009 the first issue of Ordo Draconis: The Journal of the Dragon Warriors Role-Playing Game, was released for free download. 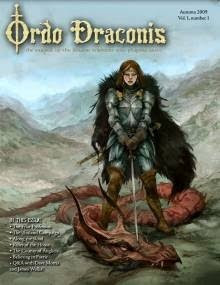 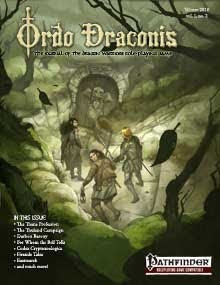 In issue one you’ll find the very first map ever drawn of the Lands of Legend by Leo Hartas in 1984. That’s very nostalgic and quite a coup for a free fan-produced online publication. Of course, that’s improved upon later on by the interview with Dave Morris, one of the original creators of Dragon Warriors in the 1980s and James Wallis of Magnum Opus Press, the man who brings us the new Dragon Warriors in all its glory. That’s very impressive and it gives an insight into where Dragon Warriors came from, where it is now and where it’s going.

There then follows several articles that most Dragon Warriors GMs will find useful. There’s a few house rules you might want to use in your game, the Friar profession, some encounters, details of a PBM Thuland campaign, the details of the county of Anglicia in Ellesland, an essay of the Faerie in the Lands of Legend, an adventure and, finally, a detailed (but sadly incomplete – the skills section is missing!) Dragon Warriors character sheet.

Issue two follows the same design path but this time there are plenty more pages and more people contributing, so it’s hardly surprising that they’ve started charging for the 97 pages the fanzine has grown into. With another excellent cover by John Hodgson the PDF is filled with more useful articles, but this time there’s an addition to the fanzine. Now the stats presented are accompanied by their Pathfinder equivalents. That’s right, the role-playing game from Paizo Publishing is being represented in the pages of the fanzine.

The contents of issue two include a poster map of Northern Cornumbria, the Thane profession, a detailed look at the Darbon Barony, a spooky short story, a closer look at Eastmarch, the ‘Codex Cryptozoologica’ which showcases a creature of the world, more encounters, more from the Thuland PBM game, a review of the Dragon warriors supplement ‘Friends or Foes’, a new adventure, some atmospheric words and names from Cornumbria, and finally the corrected character sheet from issue one (and very functional and detailed it is, too).

So, how do these two publications measure up?

Let’s get my bias out of the way first. I play Dragon Warriors, I enjoy Dragon Warriors and I have every one of the new Dragon Warriors publications up to yet. I like the Lands of Legend and so I’m always on the lookout for new stuff to add to my collection. Ordo Draconis fills this need quite well – as a GM I’m looking for new encounters to run and new locations to game in, new ideas to inspire and new characters to use and abuse. So, this fanzine has come along at the right time for me. With that in mind let’s press on to what I thought about the publication.

The wording is clear, the font used is easy on the eye and the layout is excellent. It’s all black on white with some (but not many) illustrations. To be honest, it’s surprising that the 38-page issue one PDF is free – the John Hodgson cover is very evocative and both issues definitely appear to be something you’d see on a newsagent’s shelf. Full cover, clearly worded and professionally done. That’s a good start.

In fact, the thing that impressed me the most about these fanzines is the professional look of them both. The fact that the first one is free is a massive bonus as its laid out and presented like a product ready for purchase. All it needed was a cover price and a shelf and I would have been quite happy to buy a copy. In many respects the fact that it’s free and useful is almost too good to be true.

As with many fanzines the first issue is text heavy – it would have been nice to see more illustrations to break up the walls of text, or maybe some diversity to the page layouts as the articles are in the two-column format, as they are in both issues, all sharing the same font and style. Saying that, there are some very nice full colour maps later in the fanzine.

I found the most useful articles in issue one to be the ‘Along the Road’ encounters, and the adventure ‘The Ruins of Castle Cerreg’ as I can put these to good use. Another scoop is the article by Dragon Warriors author Dave Morris ‘Believing in Faerie’, an excellent essay about the use of the creatures and races of Fay in the game. There was some wasted space, especially at the end of articles, and the text-heavy layout wasn’t a bad thing but I found myself wanting more illustrations to help stoke the imagination. Some small sketches for the encounters would have been nice, and some more atmospheric illustrations for the adventure would have been better, but bearing in mind that the fanzine was free what you get is more than sufficient. What was highly disappointing was finding out that the detailed character sheet included at the back of the magazine did not include space for skills! This is corrected in issue two and is an excellent character sheet, but finding this out after printing twenty copies was a little disappointing. All in all, Ordo Draconis issue one is an excellent fanzine.

Then came issue two. This issue is being charged for (just to cover costs, there’s no profit involved) and at a whopping 97 pages I’m hardly surprised. With another John Hodgson cover and much more meat within the pages I delved in with high expectations.

I wasn’t disappointed. There was plenty of material in the fanzine for me to use in my games and, whilst I found the very good story entertaining but a little redundant as far as game use was concerned and the PBM game very interesting but of no real use to me, I think I’ll be able to put each and every one of the articles to use. Although once again there are large clumps of text there are now more illustrations that fill it out nicely and add a little extra depth to the fanzine.

I was surprised to find that the fanzine was now dual-statted - players of Paizo Publishing’s ‘Pathfinder’ game will find stats for the characters included. The stats take up very little space and do not intrude on those of us who use and enjoy the Dragon Warriors system and are an excellent idea as it will draw players of another highly regarded and enjoyed system to the Lands of Legend. Legend is such an atmospheric and evocative setting that it deserves all kinds of attention and this is a clever way to draw more players into the world.

Issue two, although similar in layout to issue one, is a whole new magazine. The articles are much longer and have much more detail in both the writing and the additional rules and statistics. This especially shows in the detailed look at the Darbon Barony, the Eastmarch article, the ‘Codex Cryptozoologica’ and the new adventure. The additonal details give you plenty of material and that’s what you want from a gaming fanzine – stuff you can use in your own games. Issue two has this information in abundance and just these four articles alone are well worth the asking price.

What I like most about issue two (and this can be said of issue one, too) is the fact that all the people who have worked on it have captured the flavour of Dragon Warriors really well. There are no high-fantasy influences or sudden changes of atmosphere or design to suit an author’s interpretation of the game. The articles all share the same pseudo-historical fantasy feeling of the Dragon Warriors game and this is to be highly commended as this whole thing could have easily been a cheap fan rag written as an interpretation of the game, with insane extra spells and high-fantasy creatures and locations. No, the writers have kept the content in line with the Dragon Warriors design, so much so it could easily be considered part of the official Dragon Warriors product line. Indeed, Magnum Opus Press are fully supporting the fanzine even though it is not an official publication. This is what gives Ordo Draconis its strength – the fact that you could easily believe that this has been designed for the game under the watchful editorial eye of the publishers.

I have no trouble whatsoever recommending Ordo Draconis to not only fans of Dragon Warriors and Pathfinder but of any fantasy role-playing game. It’s professionally made, well laid out, cleverly realised and there’s plenty of material to give you plenty of inspiration. What more could you want from a fanzine?