It's probably become apparent to those of you who are mad enough to read my blog regularly that I kind of like Dragon Warriors.

Well, it's true, I do like it a lot. In fact, if you click on the image below you'll be able to download a completely free introductory book which will give you the full character-generation rules, two of the game's seven basic character classes, the combat system, full background on the territory of Ellesland and a short introductory scenario. 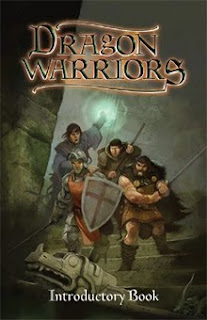 I'm just loving the back-to-basics approach of the game as I've been playing crunchy rules systems for years. A nice, simple system coupled with a great setting, that's what I've got here.
Saying that, I've been musing over the idea of a crunchier version of the game, kind of an Advanced Dragon Warriors. Would this suck the fun out of the game or add extra depth? I'm not sure. I do know, however, that I always preferred Basic D&D over AD&D.
Posted by Farsight Blogger