The Dragon Warriors Bestiary is a helpful and easy to use 90-page softback book that every DW GM needs. Although it details all the monsters you might come across in the Lands of Legend it can be used for any setting you decide to game in. 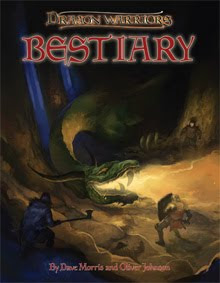 The layout is very simple – it begins with the chapter ‘Creatures of Legend’ and this informs you how the beasts in the book are used in a game, from their movement rate to their experience value to their vision types. These points are clarified, as they can be different from creature to creature alongside their normal ATTACK, DEFENCE and other scores. This chapter also covers what treasure they may be carrying, but you’ll need the Dragon Warriors core rulebook treasure tables to put this to good use.

The next chapter is the ‘Chance Encounters’ section, which is basically a sequence of charts that contain a list of random creatures you might encounter in certain terrains or locations on a D100 roll. There are some expanded ideas on some of the sea borne encounters that the GM might like to run, such as encountering pirates or ships of undead.

The next few chapters then cover the different kinds of creatures you will encounter. Each entry gives you an overview of the creature, such as a description and their general temperament, an idea of where they will be encountered and, if necessary, how to run them in combat and special rules for those with special skills of abilities. The entry then ends with a small stat block detailing in-game statistics.

Chapter 3 is ‘Men and Man-Like Creatures’, such as Dwarves, Elves and Orcs. There are a few hints on how to allow players to run Dwarves and Elves as player characters but there are no real differences between them and a normal PC, other than there are certain ability scores the player must have and the Elves have some special skills.

Chapter 4 is ‘Animals, Tame and Wild’, and this covers mundane creatures such as Bears, Dogs and Wolves.

Chapter 5 covers ‘Monsters of Legend’, and in here you’ll find fantastical creatures such as the Chimera, the Gargoyle, the Minotaur and (gulp!) the virtually undefeatable Dragon.

Chapter 6 brings you ‘The Supernatural’ which details those creatures with a magical bent, such as the hag, Lycanthrope and Imp.

Chapter 7, the ‘Creations of Sorcery’, has some interesting creatures that have been created by magical means such as the Golem, Moon Dogs and Skullghast.

Chapter 8 is ‘Infernal Creatures’ and this covers those devils that may have clawed their way out of Hell, such as the Hell Hound, Hellrot and the Succubi.

Finally, Chapter 9 has a healthy list covering ‘The Undead’, from Ghosts to Vampires to Zombies.

Rounding all this off is a one-page index with al the creatures listed in alphabetical order with their respective page numbers for ease of use and reference.

The book itself is functional and easy on the eye. The excellent John Hodgson cover depicting a small band of adventurers in the unfortunate path of a fire-breathing dragon is dark and foreboding and quite dramatic. The inside of the book is functional and plain; i.e. there are no fancy graphics covering the pages and the text and art is all black and white. Print is a fine readable size and it’s all laid out quite well.

What disappoints me about the book is the lack of artwork. There are more than 120 beasts and monsters in this book and, say, only 1 in 5 gets an illustration. The descriptions are more than enough to tell your players what they see but the ability to just hold up the book, point and say ‘that’s what’s bearing down on you’ is much more effective than any kind of long description. I’ve found myself more than once saying ‘you know the Orcs from Lord of the Rings? They look like that’ or ‘remember the dragon from Dragonslayer? The Wyvern looks like that’. That’s fine, but when the creature is more complicated than that then I’d like an illustration to hold up and just say ‘that’s it’.

Also there are a lot of spot rules. GMs may find themselves slowing the action to refer to the book for special situations or rolls for the creature. This doesn’t tend to be a problem if the monster is cued up and you intend to use it and it’s abilities in a set encounter but it can slow down off-the-cuff speedy random encounters.

What’s good about the book is that there are plenty of creatures in here to use in any location of the Lands of Legend, or anywhere in any world you have created or decided to game in. If you’ve decided to create your own world then there’s plenty to inspire you, and if you’re playing in an established world then pretty much everything is covered and, if it isn’t, then there’s an equivalent that’ll do the job. In fact, I’ve been perusing the book wondering if I can use the Dragon Warriors game in Middle-Earth and there‘s nothing stopping me from doing that. Every creature I would wish to be present in a Middle-Earth campaign is here.

All in all it’s a good book with some pretty good monsters inside, and even though the bestiary in the Dragon Warriors rulebook is quite good this books expands on those and offers plenty of other opportunities. It is one of those books that you really need if you intend to adventure using the Dragon Warriors rulebook as there are a plethora of creatures in these pages, some you may recognise and others you definitely won’t, to keep your average player character fighting in original encounters for a long, long time.