Did I tell you that my son Bruce has joined Stargate Command? It's true. He met his new SG team last Saturday. 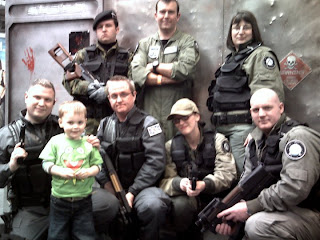 It was a long time coming but he got his Cheyenne Mountain and Offworld travel pass, and he goes to planet P65565xc next Tuesday. I drew the line at allowing him a P90, though.
If my son wants to follow in his mommy and daddy's footsteps and get geeky then that's fine by me and I'll nerd him out as he wants. I'm not going to push him and parade him around in costumes. If he goes the whole hog and gets into RPGs then that'll be the icing on the cake.
If he doesn't grow up to be a geek... well, that's unnacceptable. He will bow down to the Nerd God!
Posted by Farsight Blogger