I think I know what I want to do next as far as running an RPG is concerned. I want to take a trip back in time and run TSR's Buck Rogers in the 25th Century! 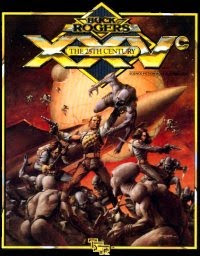 It's got everything I'm looking for in a science fiction RPG right now. Big pulp action heroes, rocket ships, laser ray guns, big bad cackling badguys and great battles against the odds. More than all that, it's fun!

My Traveller game has gotten off to a bit of a false start at the moment. I was going to run a dark, deep space adventure but a couple of cancelled games and some serious lack of forward momentum has kind of turned me off it. Now I'm thinking of doing something a bit more pulp, a bit more adventurous... mainly something a bit more old school, and it doesn't get more old school than science fiction AD&D. It even has THACO!

Oh, crap. THACO. I forgot. I frickin' hate THACO. I've declared my distaste for AD&D 2nd Edition (which is the system Buck Rogers XXVc is derived from) but there are some differences that make it more than playable. In fact, I reckon that if that if TSR had played their cards right - and if the lady in charge of TSR at the time hadn't been Lorraine Williams, a granddaughter of the family Dille who created and owned the Buck Rogers license - this system could have been a serious contender for the science fiction version of Dungeons and Dragons. It honestly could have worked, with campaigns and adventures set in existing and custom-built settings. In fact, there's nothing stopping me from creating a retroclone and doing all that myself! Imagine that!