The very first adventure... didn't go so well. The game was great, but the rogue and the engineer of the group were pretty much killed. As it was the first game I was lenient and gave them a second chance in the guise of the mad scientist they were trying to evict bringing them back from the dead so that he could use them for his experiments. Much escaping and running ensued.

The game was good, that much was certain. A few things will be introduced for the next game:

1 - An accounts book. The players have a ship, the 'Tommygun Nova', a 50-ton cruiser they bought for nearly 700,000 credits. With all the repayments, docking fees, fuel costs and other sundries they need to keep track of money coming in and going out. That is a game in itself.

2 - Nose art for the ship. As I'm giving it a slight 1930s/1940s feel, I felt it would be cool to have nose art on the rocketships as they had on the bombers and fighters of the 2nd World War. 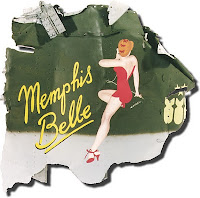 There's a selection of nose art here - I figured if the vessels had these they'd be even more individual and give the vessel much more personality, and rocketships would look so cool with these painted on them.

3 - Power down the badguys. Yeah, I guess they died because I slightly over-powered the bad guys. I need to calm down before someone gets seriously hurt!