Get More For Less

I've been looking at miniatures to use in my Dragon Warriors games and I found that for a box of five or six plastic figures it'd cost me around five pounds. So I did some more searching and I found that I can buy a bag of about 60 medieval knights for less than three pounds. 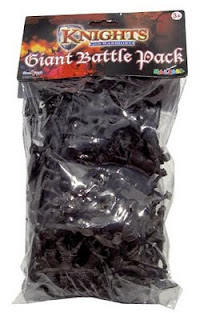 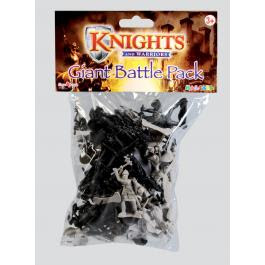 They're 45mm high and of low detail and quality, but who cares? I'm not looking to create a diorama or win any awards, I just want to be able to position figurines on a map drawn on a whiteboard so that I know where the PCs and NPCs are. I can cut off weapons and glue them back on to create my own figures and every time I need up to sixty new ones I just spend another three quid.

It surprises me that no company with an eye for the RPG or wargames market makes a selection of dirt-cheap figures such as these of fantasy creatures, packets of 60 orcs or packets of 60 skeletal warriors. I reckon they'd fly off the shelves.
Posted by Farsight Blogger