Following on from my last post about Dead Space, I've decided to take an old RPG system of mine and create a playtest document for a roleplaying game designed with the sci-fi horror genre in mind. I'm calling it THOSE DARK PLACES, named after a book of science fiction stories I wrote a couple of years ago, but whereas the book dealt with those who got a less than stellar deal from the future this game will deal with the dark corners of the universe, as showed in films such as Alien and Event Horizon, or games such as Dead Space. 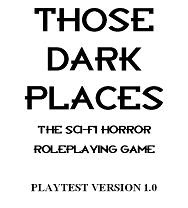 The playtest version is now available at my website in PDF format. It's free to download and is ready for use, including the bones of an adventure. It's only the playtest version so comments and constructive critiques are welcome.
Posted by Farsight Blogger